500 not out as Plato wins at Knockhill 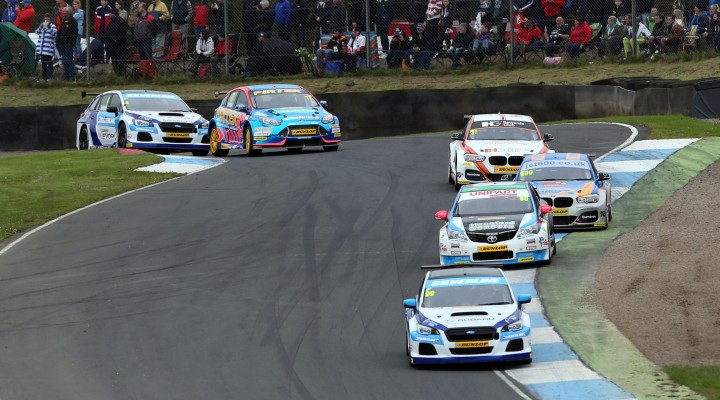 Jason Plato celebrated his 500th BTCC race in style by taking a commanding lights-to-flag victory at Knockhill, becoming the 11th different winner in this incredible season so far.

The Silverline Subaru BMR Racing driver made a quick getaway off the line, building a strong gap over the first half of the race. He was being reeled in by the BMW of Jack Goff in the latter stages, and also had to contend with a safety car period, but the BTCC legend held on to claim his 95th race win.

The race began in steady fashion with the top six drivers – all running the Dunlop SportMaxx soft tyre – holding station on the opening lap. Matt Neal’s Honda nudged Adam Morgan’s Mercedes into a spin further down the order, shortly before Andrew Jordan traded positions with Colin Turkington for fifth at the start of the second tour.

Turkington’s race was compromised by the move as it was clear his Subaru Levorg was quicker Jordan’s Ford for much of the contest. The duo ran side-by-side during lap eight but Turkington had to wait until lap 14 before he could finally snatch back fifth place.

Goff had passed team-mate Sam Tordoff and Tom Ingram’s Toyota by that point, and now up to second, began carving into Plato’s lead.

The safety car was deployed on lap 20 after Dan Welch tipped Warren Scott’s Subaru into the gravel, which ironically threatened to derail team-mate Plato’s chances of victory. Scott’s Levorg was retrieved by the marshals and the race was soon underway, with Plato managing the remaining laps with consummate ease as a late challenge from Goff failed to materialise.

“Before this weekend I wasn’t getting caught up in any of the numbers,” said Plato. “You cast your mind back to where it all started – struggling in single-seaters with no money, and doorstepping Sir Frank Williams. 500 races later and we’re still winning. Whilst we all wanted to get that first win at Subaru, did it matter too much to me? It was just great to see the cars winning come what may out of the car. In the car, I was obviously disappointed! The ball was just yet to roll my way.”

“Everybody’s been fantastic with me this year,” revealed WSR’s Goff, after scoring his best result of 2016. “They’ve given me a great car and it was about time I repaid them with a bit of silverware for this side of the garage. The tyres drifted towards the end there but before the safety car I was really closing in on (Jason) so it came at a bad time for us. I spoke to my engineer about having a go but I’d got past before I’d finished asking!”

The excitement in the closing laps came from Turkington as he carved his way past Tordoff with a sensational move at the restart. He then grabbed the final podium position with an expert late move by Ingram at the hairpin on the penultimate lap.

“I really enjoyed that,” enthused Turkington. “The car was obviously strong. I lost a positon to Andy (Jordan) on the inside of the hairpin early on. I got bunched up the inside and he outdragged me down the straight. It was just about being patient though. I knew the race would come to me and my pace was electric once I got past AJ. I’m really pleased for the team – another double podium, so it’s great.”

Jordan eventually claimed a lonely sixth, ahead of the impressive Dave Newsham. The series returnee starred throughout for Power Maxed Racing, rewarding the squad with its best result of the season.