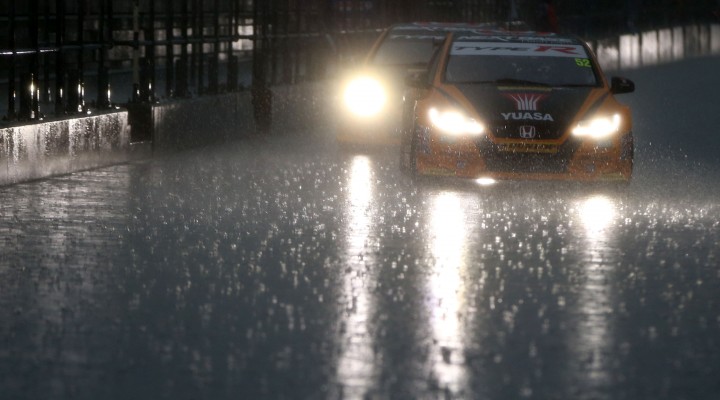 Thunder and lightning greeted the 31-cars as the qualifying session got underway, with all drivers keen to clock a benchmark lap in the early stages. Halfords Yuasa Racing’s Shedden did exactly that as the Honda Civic Type R man produced a timesheet topping effort.

Motorbase Performance’s Mat Jackson and the Silverline Subaru BMR Racing duo of Jason Plato and Colin Turkington slotted in behind the Scotsman, before another deluge of rain halted proceedings. Matt Neal, Rob Collard and Plato were among those to endure off-track excursions during the running, proving that the conditions were a handful for even the most experienced of BTCC drivers.

A ten minute delay allowed for the rain to ease and officials to assess the track conditions, which were deemed driveable once more with 14 minutes still on the clock.

As grip levels improved with every tour Shedden rubber-stamped his authority on proceedings by recording a further improvement in the closing moments.

“It was ok for the first three laps and I was able to set a good time,” said Shedden. “It got worse out there very quickly and I nearly collected Jack Goff’s BMW who was spinning in front of me. It was definitely the right call to stop the session. Then the circuit improved dramatically late on and I set an even quicker one at the end, showing that the Honda Civic Type R is a great car in all conditions.”

Jackson’s Ford held on to second ahead of the charging Josh Cook – the young MG Racing RCIB Insurance driver waiting until the final seconds to fire his MG6 into third.

“P2 puts us right into the mix for tomorrow,” said Jackson. “It’s great fun in the wet. You hold on tight through turn one and do the seatbelts up. We’re hoping to get a good run off the start tomorrow and shuffle things up. There’s 200 odd points still available so it is very much all to play for.”

“It was good fun,” agreed Cook. “It was a mixed session and I couldn’t see anything at one point. I left it until right at the end and pushed at just the right time. Credit to the guys for turning the car around after a difficult few meetings.”

Plato and Turkington were next in the order although the former’s Subaru Levorg limped back to the pits with rear damage after another incident late on. Ashley Sutton made it two MGs in the top six as the rookie continues to impress in his maiden BTCC campaign.

Tom Ingram’s Toyota was next up, whilst Neal will be content to have come home in eighth. The triple champion will have been further pleased to see that his main championship rivals – Sam Tordoff and Rob Collard – languishing down the order. All three West Surrey Racing BMWs faced a difficult session with Goff, Collard and Tordoff ending up 26th, 27th and 28th respectively.

There was better news for Adam Morgan and Hunter Abbott, however, as they completed the top ten order. WIX Racing’s Morgan still harbours intention of winning the championship, whilst Power Maxed Racing’s Abbott continued his upturn in qualifying form since the mid-season break.

Rob Austin will start tomorrow’s opening race from the back of the grid after officials today reviewed an incident between him and Morgan from Knockhill. Handy Motorsport’s Austin was adjudged to be at fault and now faces the grid penalty due to it being his third strike of the season.