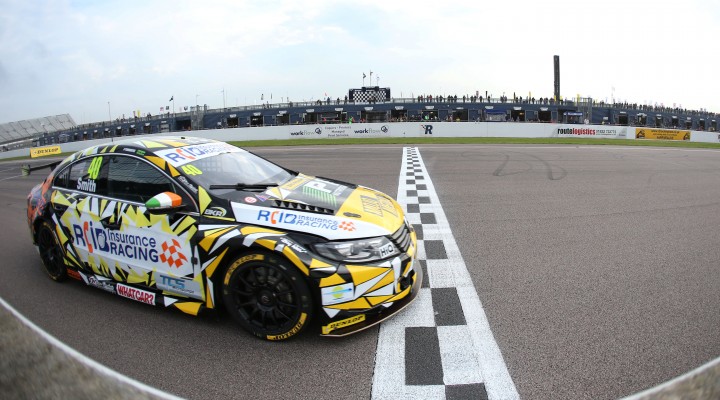 Aron Smith made it an incredible 12 different winners in the 2016 Dunlop MSA British Touring Car Championship – a record number in the illustrious 59-year history of the series – after the Irishman soaked up race-long pressure to win the final bout at Rockingham.

Smith had to contend with three safety car periods and two double champions in his rear mirrors, but he dealt with every challenge to claim the first every victory for the fledgling Team BKR outfit.

It was Matt Neal and Mat Jackson initially pressuring Smith off the line, but the pair would later succumb to the charging Gordon Shedden and Colin Turkington – both running the medium Dunlop SportMaxx compound.

The Team JCT600 with GardX BMW of Rob Collard also looked to be a contender but he couldn’t keep pace with Shedden’s charge, with the Honda man disposing of Ashley Sutton, Jackson and team-mate Neal in quick succession.

Andrew Jordan was another to lose places, particularly after he produced a sensational save from a wild slide.

Turkington was busy scything his Subaru through the order from 16th on the grid and when the dust settled during a third and final safety car period the Ulsterman found himself in a podium position.

The battle between Shedden and Turkington over the final three-lap shootout aided Smith’s cause with the trio eventually crossing the finish line separated by just half a second.

Neal and Jackson held on to fourth and fifth respectively while Collard had to settle for sixth at the finish. Halfords Yuasa Racing’s Neal has now closed to within five points of championship leader Sam Tordoff, who finished outside of the points in his ballast-laden BMW 125i M Sport.

Adam Morgan was seventh for WIX Racing, ahead of impressive runs from Jake Hill and Aiden Moffat. RCIB Insurance driver Hill finally got the result his undoubted pace deserved, whilst Moffat made it a hat-trick of points finishes on the day.

Jason Plato was tenth after the Silverline Subaru BMR Racing driver produced his own fantastic drive from the back of the grid.