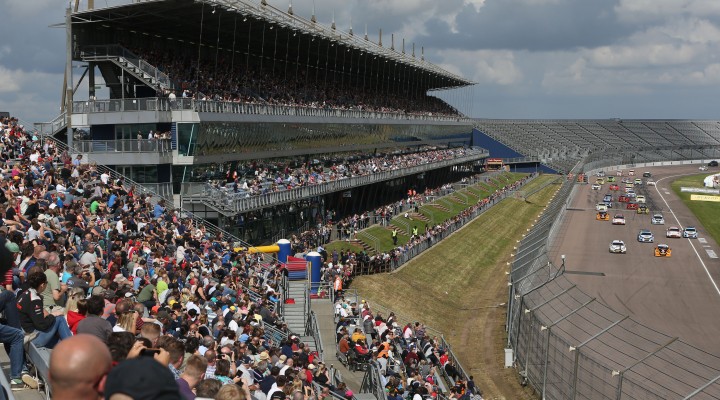 Gordon Shedden has taken his third win of the 2016 Dunlop MSA British Touring Car Championship after securing a lights-to-flag victory in the Rockingham opener.

The Halfords Yuasa Racing driver made a decent getaway but had to fend off the attentions from fellow front-row starter Mat Jackson in the early stages.

Jackson soon fell back into the clutches of the Subarus, however, after both Jason Plato and Colin Turkington blasted by Josh Cook’s MG off the line.

A number of minor incidents on the opening lap led to a short safety car period, but reigning champion Shedden produced a stellar restart before gradually pulling away from the chasing pack. When the #52 eventually crossed the line, Shedden had secured the perfect pole position, fastest lap and race win treble.

“I’m giving it everything to claw my way into the title race,” said Shedden. “The championship’s swinging so much round by round. I don’t want to let go of it just yet. Another win is just the momentum we need at this point in the season. Mat (Jackson) almost got around the outside of me into turn two on the opening lap. He got a good run but I held on.”

Jackson’s Ford Focus became the widest car on the grid for the second successive race after the Motorbase Performance driver backed up his Knockhill race win with another masterclass here. Although this battle was for second, Jackson again produced an impressive defensive drive to keep Silverline Subaru BMR Racing duo of Plato and Turkington at bay.

“It was a good race for us,” commented Jackson. “The Subaru didn’t look as if it had the legs through the corners but in traction they definitely had the advantage that comes with the rear-wheel drive. Every lap he (Jason Plato) was within striking distance of going up the inside at turn two but he couldn’t quite make it past. It’s good for us and good for the championship result. Let’s see what race two brings.”

“I couldn’t find a way past,” Plato confirmed. “I was all over him through the corners but he was pretty good on the brakes so it was a bit of a stalemate. I was hoping he’d struggle more with the tyres towards the end but third’s good, isn’t it? Colin (Turkington) didn’t have any more pace than me, really. We kind of ebbed and flowed though, I was quicker in some areas and he was quicker in others.”

The MGs of Josh Cook and Ashley Sutton recovered from relatively slow starts to come home fifth and sixth.

Andrew Jordan made it an Independents’ one-two for Motorbase Performance after he surged from 14th on the grid to finish seventh after a number of eye-catching moves. Championship leader Sam Tordoff produced arguably the most spirited drive, however, coming from 28th through to tenth.

Matt Neal and Dave Newsham fell between the fightback drives from Jordan and Tordoff. Title contender Neal had to scrap for every single position, eventually finishing exactly where he started in eighth. The Honda man dropped outside the top ten at one stage before he hauled his ballast-laden Civic back up the order, ahead of another impressive drive from Power Maxed Racing’s Newsham.

RCIB Insurance driver Jake Hill was robbed of a hard earned top ten result as mechanical gremlins with his Toyota Avensis ended his challenge late on.