A season best for AmDTuning at Rockingham 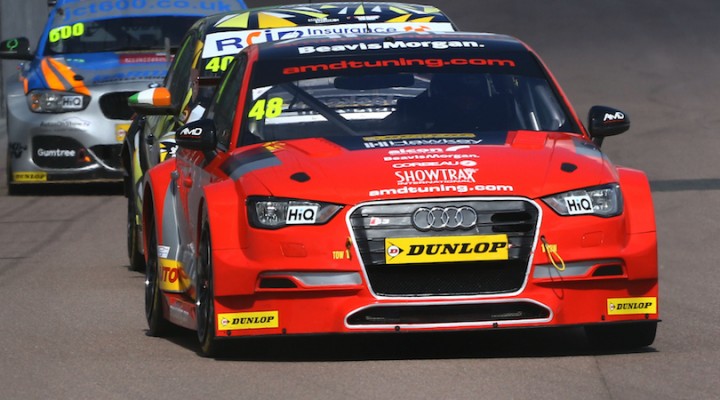 The AmDTuning.com team enjoyed its best weekend of the year by far with a brace of points finishes from the eighth meeting of the Dunlop MSA British Touring Car Championship season at Rockingham.

The West Thurrock-based team went into the weekend keen to realise the potential in its Audi S3 after two difficult meetings at Snetterton and Knockhill, where lady luck went against driver Ollie Jackson in his quest to add to the two points finishes he enjoyed in the opening half of the year.

The weekend started well with Ollie showing solid pace through the two free practice sessions although challenging wet conditions in qualifying meant he was forced to settle for 20th on the grid.

Electing to run the hard compound Dunlop tyre in the opening race, Ollie drove well to secure 17th place, barely two seconds away from the points scoring positions, but then produced his best drives of the season in the remaining two races to bring home valuable championship points.

A strong start to race two saw Ollie jump up four places on the opening lap and he pushed hard to climb to eleventh spot, chasing down the Honda of race one winner Gordon Shedden.

Keen to try and make a move into the top ten to gain a chance of benefitting from the reverse grid draw, Ollie made a move for position on the final lap only to be forced wide, slipping back to 13th spot but still securing a points finish.

Further showing the pace in the Audi, Ollie went even better in the final race of the weekend where he diced for position for long periods with the works Subaru of Jason Plato before taking the flag in eleventh for his best result of the year to date and a second points finish of the day.

“It’s been the best weekend of the year by a long way,” he said. “We made some changes to the car between Knockhill and here and it has transformed things, so it is great to prove what we can do; it certainly puts the previous two weekends firmly behind us.

“We had a good car in free practice but in qualifying we didn’t quite have the set-up that we needed. We were further back than we could have been on the grid, but it didn’t make too much difference on race day as we fought hard and made up the places on merit. The car was brilliant and the team has done a fantastic job; I’m so glad that we’ve finally been able to pick up some results that we deserve after a difficult spell.

“We have made a big step forwards this weekend but I don’t think we are finished yet with the car and I don’t think the performance we have seen this weekend is a one-off. I’m really looking forward to seeing what we can do at Silverstone.”

Team boss Shaun Hollamby was understandably delighted with the results from the weekend, which provide a boost in confidence going into the final meetings of the campaign at Silverstone and Brands Hatch.

“We always knew that we had a car that was capable of fighting for points and that could challenge towards the top ten, and this is the weekend that we have been able to show it,” he said. “After Knockhill, we looked at what we could do to make improvements, and have reaped the rewards of that work with a performance that is easily the best we have had this season.

“Ollie has driven really well this weekend and has shown some of his critics what he can do, and the results he has picked up have been on merit and not because others have simply fallen off or had problems.

“Whilst we might have a small budget compared to other teams on the grid, the fact we have gone out there and raced wheel to wheel with people like Gordon Shedden, Andrew Jordan and Jason Plato shows what are capable of.

“Thanks to Rob Tickner, Keith Cheetham and the whole AmD team, plus Ollie’s mega job behind the wheel, we are now starting to unlock the Audi’s potential. The next two rounds can’t come fast enough!”