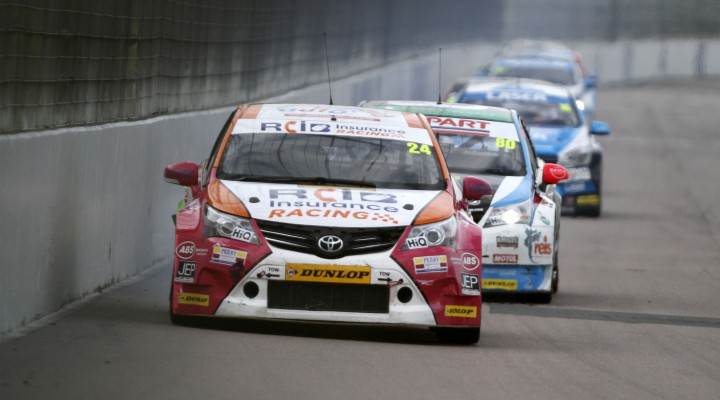 Jake Hill scored his second top-eight finish of the 2016 Dunlop MSA British Touring Car Championship season at Rockingham – the least he deserved over a turbulent weekend with technical tribulations and monsoon-like conditions.

A sixth spot came back at Croft in June for Hill and but for an overheating engine in race one this past weekend, he could have been knocking on the door of a similar result once again in Rockingham’s opener.

Outside of intermittent mechanical trouble with his Toyota – no fault of his own – his pace and race craft was difficult to question. An enthralling battle with three-time champion Matt Neal that lasted the best part of half a lap of the Corby circuit was the perfect illustration of this. The Team HARD racer was running 11th after getting the better of the Halfords Yuasa Racing man and looked likely to progress further until an overheating engine brought his charge to a halt.

“It was a crazy first lap and then I got a run at Matt and just held my ground – I was on the inside, then the outside and then inside again and got it done eventually down at the hairpin, but that was mega!” said Hill.

Neal said of the battle: “Jake’s a really good little racer, tough but fair, he earned that position fair and square.”

“The car was handling brilliantly,” continued Hill. “Thanks to the team for a great job – I was catching the group ahead and know I would have made up more places. So frustrating that the issue stopped us.”

Race one’s technical trouble saw Hill starting race two down in 29th and a poor getaway didn’t help matters either. Despite this, he carved past near half of the field to bring the RCIB Insurance Racing Toyota Avensis home 16th.

The final race of the day was where Hill’s promise finally bore fruit. With three safety car periods, the running was condensed into short bursts. Each sprint saw the 22-year-old make progress, with the highlight coming in the form of a smart double pass on Ollie Jackson and Aiden Moffat to move him into the top ten – P8 and strong points the eventual result.

“The car was really strong here, it’s a shame we didn’t have dry qualifying as I think we’d be near the top-ten and maybe challenging the top six in the races. I had some great battles,” said Hill.

“The signs are becoming more positive as the season goes on.”

Hill will be looking to continue the improvement he’s shown throughout his maiden full campaign across the remaining two rounds, Silverstone in just over a fortnight’s time and at the Brands Hatch GP season finale – a circuit he relishes.