High-flying duo soar through the skies for Macmillan 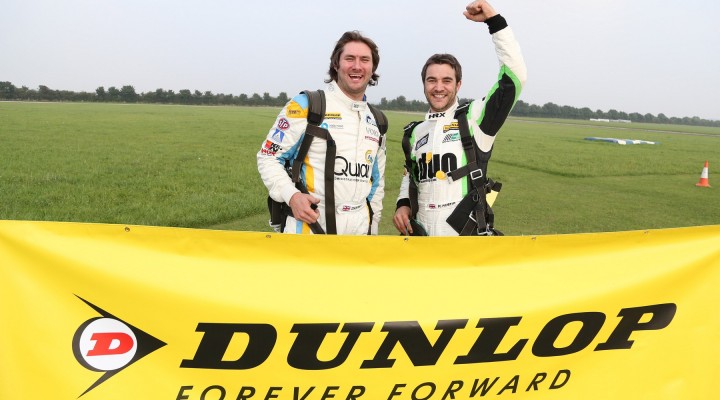 Pre-race meeting preparations might traditionally take the form of shakedowns, simulator work and hitting the gym, but Rob Austin and Dan Welch adopted a different approach ahead of Silverstone this weekend (17/18 September) – jumping out of a plane at 13,000 feet.

When the opportunity arose to participate in a tandem charity skydive in aid of Dunlop’s official charity Macmillan Cancer Support, neither driver needed very much persuading – in fact, Austin was ready to ‘take one for the team’ by jumping multiple times if no other willing volunteer could be found.

Welch, however, was every bit as eager to put himself forward, meaning the intrepid duo headed for Hinton Skydiving Centre just down the road from Silverstone for a different kind of high-octane thrill than what they are used to.

After successfully circumnavigating a minor weighbridge malfunction for Welch, the pair listened intently during the obligatory safety briefing and chatted animatedly on the way to the plane. The playful banter continued as they soared high into the skies, with each vowing to ‘race’ the other to the ground, and to their credit, neither bottled it when the time came to take the plunge, as it were – although Austin’s landing was somewhat suspect, to say the least.

Once they were back on terra firma, the two partners in crime continued to rib each other as they waxed lyrical about the experience, before heading off for their more traditional pre-race weekend ritual – a well-earned pint.

“It might have been my fourth skydive, but I never get bored of the sensation!” enthused Austin. “The feeling you get in your stomach as you’re about to leave the plane is indescribable – and I can only apologise to Dunlop for completely missing their branded landing strip when I came down. I promise to try harder next time…”

“Wow, what a blast!” echoed skydiving virgin Welch, whose only ‘practice’ run had been indoors in Basingstoke. “Rob might have more experience at this kind of thing than me, but I definitely managed the more stylish landing so it’s probably fair to say I’m already a natural. He’s already suggesting a re-match so I think he knows he was beaten…”

The pair’s aim is to raise £3,000 for Macmillan Cancer Support, the official charity partner of BTCC title sponsor Dunlop. They are halfway towards their stated total already, and you can still contribute to the cause by donating at:

Macmillan offers information, practical advice and support to those diagnosed with cancer and their loved ones before, during and beyond the treatment phase. There are some 2.5 million people in the UK currently living with cancer, and that figure is set to rise to an alarming four million by 2030, making the work that Macmillan Cancer Support does absolutely essential.

Handy Motorsport ace Austin and Goodestone Racing star Welch will be back on-track at Silverstone this weekend for the penultimate Dunlop MSA British Touring Car Championship outing of 2016.