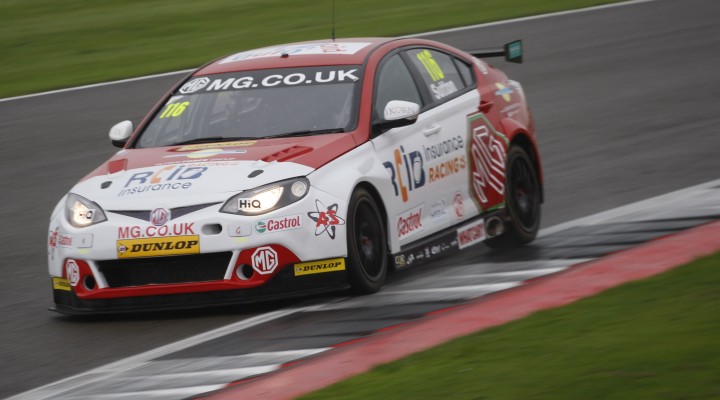 Sutton went on a late run of laps, which initially saw him fall slightly shy of Adam Morgan’s benchmark, but the young MG6 racer continued on a further tour to set the fastest time of the day so far.

“It matters in qualifying later today of course but it’s a good sign,” said Sutton. “I would say we’re in the right operating window but we still haven’t quite found the sweet spot yet. The car feels good so we’ll be happy to be somewhere in the top five on the grid.”

Ingram also left it late as he relegated FP1 pace-setter Adam Morgan down to third. It remained a positive session for WIX Racing’s Morgan, however, as he backed up his pace in the earlier damp conditions with another strong showing in the dry.

BKR’s Aron Smith is on the crest of a wave having won last time out at Rockingham and the Irishman looks strong at Silverstone too, as he blasted his VW to fourth in the order.

Former team-mates Rob Austin and Hunter Abbott were fifth and sixth respectively with the Handy Motorsport Toyota getting the better of the Power Maxed Chevrolet, although both drivers will be buoyed by their performances ahead of qualifying.

Pirtek Racing’s Andrew Jordan was the highest placed Ford in seventh while his Motorbase stablemate Mat Jackson could only manage 25th.

Josh Cook made it two MGs in the top eight, which bodes well for the Triple Eight-run squad. Jake Hill and Martin Depper impressively completed the top ten order as a number of championship challengers again struggled to find the ultimate pace.

Series leader Sam Tordoff was 12th behind Subaru’s Colin Turkington, while the Honda duo of Matt Neal and Gordon Shedden had to settle for 16th and 19th. Rob Collard and Jason Plato were even further down the order in 21st and 22nd respectively.

The all important qualifying session for the penultimate event of the 2016 Dunlop MSA British Touring Car Championship takes place at 15:45 and will be streamed live via www.itv.com/btcc.