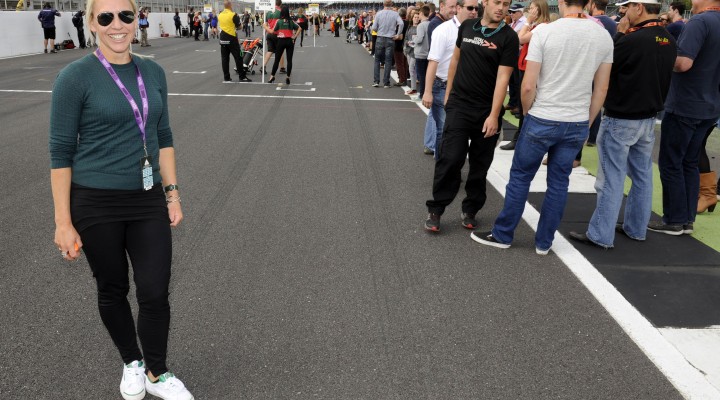 World champion athlete and silver medal Olympian Gail Emms MBE made her first visit to a motor sport paddock at this past weekend’s Dunlop MSA Touring Car Championship event from Silverstone, as she looks to encourage young people into sport and develop a knowledge of what makes racing drivers tick.

The former Badminton star racked up a World Championship win in 2006, European Championship victories in 2004 and 2006, Commonwealth Games golds in 2002 and 2006 as well as her Olympic silver medal in Athens back in 2004, so she knows a thing or two about what mentality is required when it comes to competing at the very top.

Emms got herself in and amongst all of the action in the paddock, speaking to drivers and teams up and down the pit lane and was left impressed by her maiden motor racing experience.

“Even though I’m new to motor sport, I’ve loved it. Sport brings people together and it’s an emotional rollercoaster,” said Emms. “We love the highs and hate the lows but it makes you want to strive to achieve. Seeing it first hand, it’s exceeding my expectations.

“Part of me was saying ‘I’m a sports purist’ but being here seeing the whole team environment has just been absolutely incredible. Looking around and seeing the enjoyment on people’s faces, where else would you possibly want to be?

“What’s fascinating to me standing right in the pitlane and seeing the team behind you. I used to have maybe five or six people cheering me on – the physios and the coaches – but look at all the mechanics and engineers. They’ve all got a real passion to see someone go out in the car and reach their full potential. It’s fantastic.

“I think this is the start of my motor sport education basically. It’s funny how motor sports and some other sports don’t really tend to mix. Since I’ve retired, I’ve realised the similarities between an athlete, whether it’s a badminton player or athletics or if you’re a racing driver – what you go through in sport is pretty much exactly the same.

“There’s that expectation, the adrenaline and I’m massively interested in that transition from being in an elite sport environment to what happens out of it. I’m here to get an idea of what this world is about and to try and understand it a bit more.

Having retired from badminton, Emms hope to use the experience gained at the top of her game to encourage people to follow their passion, inspire kids into sport and more girls into motor sport.

“I love the psychology and the mindset of being an athlete but I also want to inspire kids to want to be the best at something. If they’ve got passion for something, they should go for it. I’d also love there to be more girls in motor sport as well. I’m keeping my eye out and looking, as a female who achieved in sport, at being able to say ‘no matter your passion, then go for it’.

“Professional sport is all about those marginal gains. You’re looking for those one percents to try and be the best basically. You wouldn’t be here if you didn’t have that real drive and desire to want to get better and better. You learn after each match or each race and think about where you can improve.”