Motorbase has eyes on the main prize 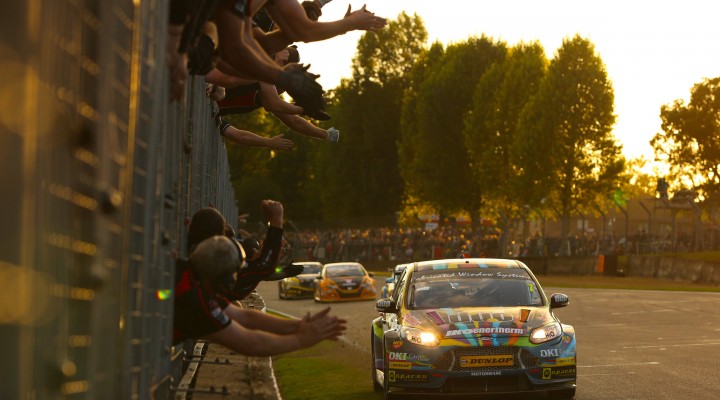 “It was most certainly our best year in the BTCC to date,” said Team Principal, David Bartrum. “To finish just 16 points off the overall championship and to get two titles in the bag was quite an achievement. The overall title was what we were really aiming for at the start of the season, but to end up with what we did was far from the end of the world.”

Despite the success, Bartrum harbours a sentiment of what might have been given just how close Mat Jackson came to winning the coveted Drivers’ crown.

“From my point of view, it was a good season albeit edged with a little tinge of disappointment because we didn’t win the Drivers’ Championship, and we can pinpoint particular things that happened along the way this year that cost us points.

“There were four moments during the season that ultimately cost us, I think. You look at Mat’s puncture at Thruxton, the power control module packing up at Snetterton or him and Andrew making contact at Brands Hatch Indy that caused his wishbone to break.

“Then you look at Gordon (Shedden). When his car was in a million bits all across the circuit at Thruxton, you would never have thought he would be champion. It shows anything can happen in the BTCC.”

Bartrum spoke highly of Motorbase mainstay, Mat Jackson – a driver he feels is an underrated specialist in his field deserving of more credit

“Mat did an excellent job and Andrew did a very good job. Mat had a little bit of an edge, as he has done for a while. Mat doesn’t get enough recognition for how good he is.

“Mat rarely gets the testing opportunities that other people do – It’s all about budget and how much work you can do pre-season – but from my point of view, I think he is one of the genuine BTCC specialists on the grid. Look at Mat’s stats this year and how well he did – he deserves to step up to that next stage.

“That’s where you’ve got to with this championship now – it’s such a tough championship with such a variety of drivers that the guys that are good become real specialists in the product.

“That’s borne out when you see the likes of Andy Priaulx, Fabrizio Giovanardi and Alain Menu coming in, and even though they are international names, the guys they are up against now are bloody good.”

Behind the scenes, the team and management are working harder than ever ahead of next season. With Andrew Jordan’s departure confirmed, the focus is on improving the car and the current aim on the driver front is keeping hold of Mat Jackson. Bartrum believes the future is bright.

“Andrew was a good guy to have in the team. I really enjoyed having him here and I think we did a good job for him. He had a good year working with us; he won the Independents’ title and was instrumental in helping us to win the Teams’ title. There was nothing sinister in our parting of the ways.

“Oly (Collins – Team Manager) and I are working probably the hardest we’ve ever worked, going out seeing people and coming off the back of a good season helps immensely.

“We’re searching for all the right elements and the right backing to take the team forward and we’re getting there.

“There’s some very exciting things in the pipeline for Motorbase over the next few months. It’s obviously a big aim of ours to keep Mat on-board and just keep working away to move the team and car forward.”

Motorbase Team Manager Oly Collins echoed the sentiments of his Team Principal. With some tweaks to the already speedy Ford Focus package and a new tyre to figure out, Collins is hoping the squad can get the jump on its rivals in 2017.

“It was no doubt our best year, and the fight with the manufacturers shows where Motorbase are now. There are some seriously good Independent teams out there and we won it convincingly in the end.

“We’ve got a few things in the pipeline for the Focus, with some aero detail and packaging that we’re working on this winter.

“Then there’s the new tyre to work out, which will be a big thing for everybody in the championship. Whoever gets a hold on it quickest will get a jump on everybody else. Hopefully that can be us.

“It’s a big engineering task for us, and being an Independent didn’t do us any harm this year with the new RML suspension to figure out. We did a good job with that, so there’s no reason why we can’t do the same with the new tyre.”

When asked to pinpoint where things could have gone better in 2016, Collins indicated that, as is often the case, the rub of the green played a part and maybe a lack of qualifying pace.

“The one you look and think, ‘wow that was bad luck’ was Snetterton. We’d had a first and a second, Mat’s had fire in his belly and he was going to finish on the podium again, maybe even won. Though had he done that, we’d have gone to the next race carrying more weight. There are no certainties, even with hindsight.”

“Our qualifying by far away wasn’t good enough this year with Mat,” Collins continued.

“At Oulton Park and Silverstone in particular, his performance was not down to anything he was doing – it was down to the team as we went the wrong way on set-up.

“When everybody is so close and you’re talking just tenths of a second, even a slight misjudgment in that respect can have a catastrophic effect. We genuinely went the wrong way on both of those occasions and by the time we rectified it, it was too late.