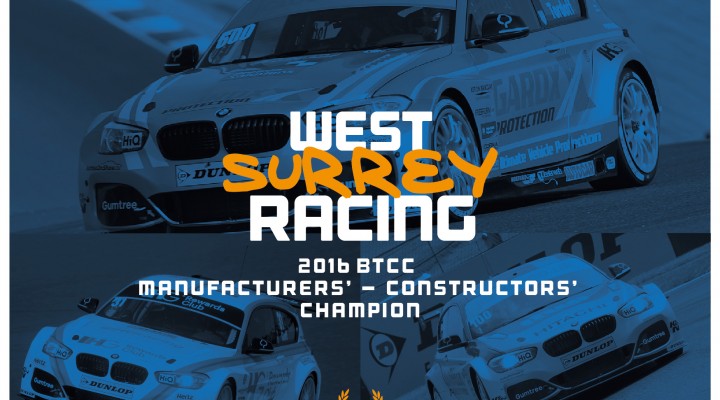 West Surrey Racing marked its 20th anniversary in the Dunlop MSA British Touring Car Championship in fine style with the 2016 Manufacturers’/Constructors’ crown heading the way of the Sunbury-on-Thames outfit.

Title success was clinched over a dramatic finale weekend at Brands Hatch, to give WSR its fifth overall championship and fourth in the past three years.

Formidable long-time rivals Honda/Team Dynamics were the early season pace-setters, leading the way until the trip to Thruxton back in May. A string of positive finishes for the BMWs over rounds seven, eight and nine of the campaign were enough to steal a march on the competition at the time, and top of the leaderboard WSR stayed – rounding out 2016 with a commanding 53-point margin over the squad in orange.

The lead fluctuated with the fortunes of each of the rival Manufacturers’ drivers. Rob Collard’s solid podium and points-score on home soil in Hampshire was followed by a quite stunning weekend for Team JCT600 with GardX team-mate Sam Tordoff at Oulton Park – second, first, second enough to propel him to the top of the Drivers’ standings and cement WSR’s credentials atop the Manufacturers’/Constructors’.

Over on the other side of the garage, Team IHG Rewards Club’s Jack Goff added points to the party with an opening weekend podium, a strong Croft showing and another trip to the rostrum at Knockhill. Between Honda’s early jump and mid-season, a glut of strong results from Dick Bennetts’ outfit meant that Team Dynamics would have some catching up to do if they were to make inroads, with time beginning to ebb away as the campaign made its way beyond the half-way point.

Honda’s Matt Neal scored perhaps the most consistently over the course of the season, always there or thereabouts but team-mate and eventual champion Gordon Shedden’s finishes in the first half of 2016 opened the door for the WSR trio to steal a march – and that they did.

Each outfit had two of its racers in contention for Drivers’ honours come Brands Hatch but in the end, despite Shedden’s late heroics, the three BMWs brought the coveted BTCC Manufacturers’/Constructors’ trophy back to Surrey with some comfort.

In terms of victories and podiums, WSR tallied four wins, nine second-placed finishes and four thirds while Honda/Team Dynamics managed nine, six and four respectively. A greater concentration of high points-scoring finishes, plus an additional driver running out of the WSR stable proved enough to swing it.

Team Principal, Dick Bennetts said: “I’m really happy for everyone at WSR to be celebrating the Manufacturers’/Constructors’ title.

“Motor racing is a real team effort and this is a deserving reward for a fantastic group of people.  We’re determined to come back even stronger in 2017.”