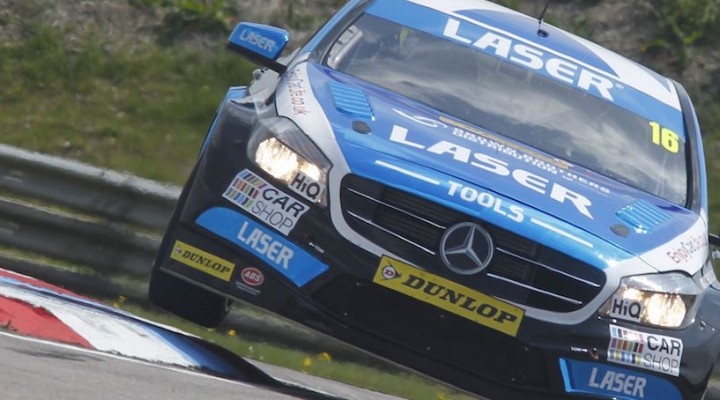 BROWN BROTHERS® Distribution has been selected, for a third year running, as an Official Partner to the Laser Tools Racing Team for the 2017 Dunlop MSA British Touring Car Championships.

The Laser Tools Racing team was new to the BTCC in 2014, set up to support young driver Aiden Moffat. Aiden made BTCC history in 2013 as the youngest driver to ever start on the grid in a BTCC race. Following a successful season in 2016 and now aged 20 there are very high hopes for Aiden in 2017.

Back in the Mercedes A-Class, Moffat is set to grow on last season’s results with the first race taking place on the 1st April at Brands Hatch. “Touring cars is where we’re going to stay,” said Moffat. “It’s a fantastic championship and as a team we’re constantly improving.”

Brown Brothers are to continue their sponsorship with Aiden Moffat Racing and will see the Brown Brothers Distribution logo proudly displayed on the car bonnet and tailgate as well as the Laser Tools Racing team kit. Brown Brothers customers will also have the chance to join the team at the races during the 2017 season in first class hospitality.

Speaking to Aiden, he added; “I’ve really enjoyed my time in the BTCC so far and the podium at the end of the year was a reward for everyone involved. It’s great to be working with Brown Brothers again, they are both very professional and very supportive of us at Laser Tools Racing. To have a partner like them is a great thing going into the 2017 season.

Moffat, who enjoyed his best season yet in 2016, including a podium in the season finale at Brands Hatch, will compete with the new Swindon Engines TOCA engine in 2017.

Danielle Aiken PPG UK Marketing Manager said “Following a brilliant season last year, we are really pleased to be associated with such an ambitious and exciting team for a third year running. We are looking forward to seeing the Brown Brothers Distribution brand showcased in the British Touring Car Championship.  We wish both Aiden and the Laser Tools Racing team all the best for the 2017 season.”

The BTCC season commences on the 1st April at Brand Hatch. Follow Brown Brothers on Twitter for updates @bbduk