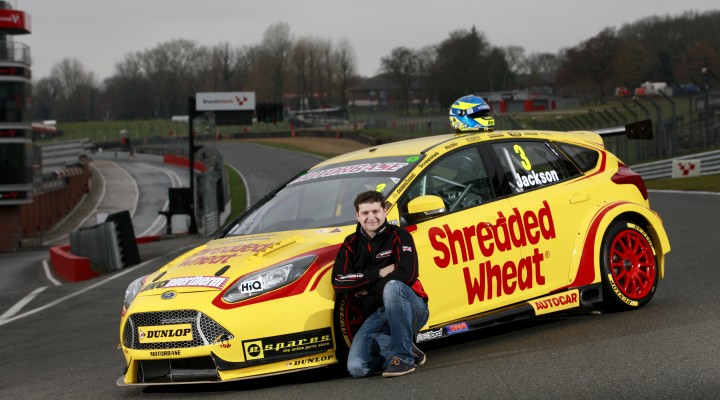 “Motorbase Performance is extremely proud to be bringing such a well-known brand as Shredded Wheat to the British Touring Car Championship;” commented Team Principal David Bartrum. “Shredded Wheat is a household name and a healthy breakfast cereal that we’ve all grown up with and the BTCC package offers them a fantastic platform to reach their target audience.”

“Their faith in us and also the BTCC shows where the championship is in terms of stature and exposure and also how far we’ve come as a team;” continued Bartrum. “I’m very much looking forward to building a strong relationship with the Shredded Wheat brand. The standout on the car looks fantastic and it certainly won’t be missed on track.”

Toby Baker, Marketing Director UK & Australia added; “Nestlé Breakfast Cereals are delighted that Shredded Wheat will be sponsoring the Motorbase British Touring Car team for the 2017 Season. The Shredded Wheat brand is a catalyst for living life to the full and so it is fantastic that we are able to partner with a high adrenaline sport like the BTCC and with a proven winning team like Motorbase.”

“We look forward to seeing the distinctive yellow and red livery of Shredded Wheat – one of the UK’s most famous brands, comes to life on the UK’s favourite race tracks in 2017.”

The announcement comes off the back of the Kent-based squad’s most successful BTCC season to date in 2016 – securing both the Independent Teams’ and Drivers’ Titles with Mat Jackson taking third in the drivers’ standings – just 16 points off the overall title. Fans’ favourite Jackson is also retained as the lead protagonist for the team’s assault on the 2017 title in the newly numbered #3 Ford Focus ST – marking the 35-year-old’s 8th consecutive season in the Motorbase line-up.

“As reigning Independent Champions we’re looking forward to the challenge of defending our crown. We’re also very happy to announce that Mat will continue to spearhead our 2017 campaign;” added the Team Boss. “After having come so close to the overall drivers’ title last season, we also have our eyes on the overall prize. Mat’s pace is unquestionable and he has shown great consistency in recent years. He is a real asset to the team and the perfect brand ambassador for Shredded Wheat.”

In addition to its new title sponsorship, the reigning Independent Teams’ Championship squad has also retained a number of major partners for the 2017 season and beyond with the return of the IKO enertherm brand – part of global waterproofing and roofing manufacturer the IKO Group – and the UK’s leading online parts retailer, espares.

“It’s great to have IKO and espares back on-board for the seasons ahead and we hope to welcome further partners to the team in the coming weeks;” concluded Bartrum. “Today’s news coupled with the announcement that we will be expanding to a three-car team in 2017 means there are some very exciting times ahead.”

Motorbase Performance and its associate sponsors are set to roll-out a number of exciting initiatives during the 2017 season to enable fans to get even closer to what is already one of the most popular teams on the grid. The eye-catching Shredded Wheat livery and new-look driver line-up are set to be revealed to both trade and public at the Autosport Show on January 12-15 2017.