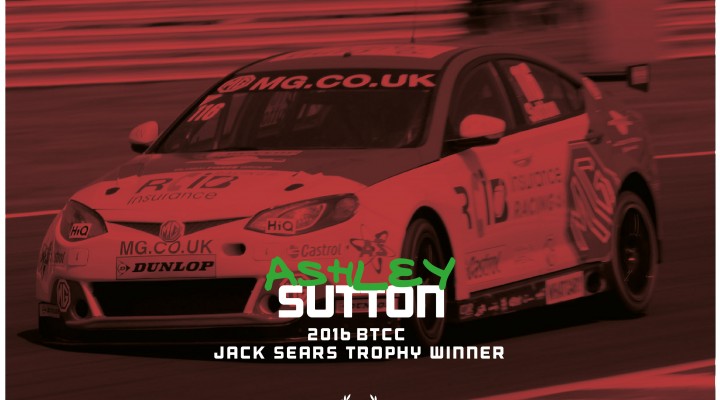 Ashley Sutton’s maiden season in the Dunlop MSA British Touring Car Championship would prove to be one to remember for the Essex-born racer, as he rounded off a strong campaign in fine style by winning the Jack Sears Trophy.

The MG RCIB Insurance man didn’t take long to assert himself as a someone capable of challenging at the sharp end, despite his rookie status. After going well there in pre-season testing at Season Launch, Sutton scored pole at Donington Park – the season’s second race weekend. A host of high points-scoring finishes showed it wasn’t just over a lap where Sutton’s capabilities shone.

Come mid-season, at the end of the Croft weekend, he’d garnered a debut appearance on the steps of the rostrum and a thrilling race three from the North Yorkshire circuit, in changeable conditions,   yielded a popular first win for the MG driver – much to the delight of the both the Triple Eight squad and MG’s contingent.

As far as the 2015 Renault UK Clio Cup champion is concerned, 2016 will go down as a job well done in the BTCC.

“People kept asking me at the start, ‘are all these big names intimidating?’ and my honest answer was always no, they are just stickers on windows. I was not going to treat the BTCC any differently to any other championship I had been in.

At the TOCA Night of Champions at the end of November, Sutton collected the Jack Sears Trophy, bearing the legendary name of inaugrual BTCC champion Jack Sears, in the year of the inaugural BTCC champion’s passing gave an extra gravitas to the achievement.