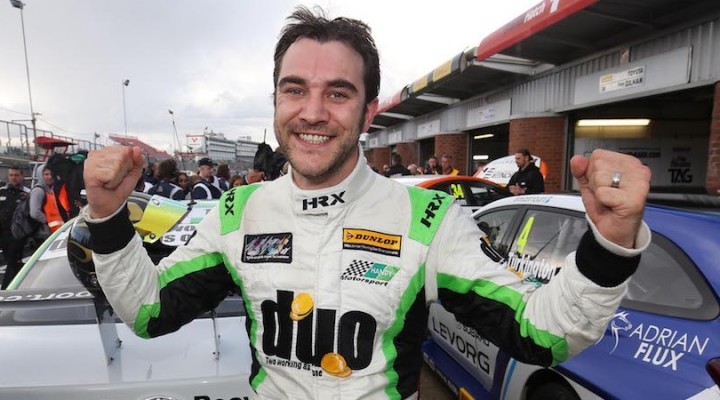 Rob Austin is in reflective mood this festive season but the BTCC race winner also has his eyes firmly set on a renewed challenge in 2017.

Austin has huge support among the BTCC fanbase and there was some surprise when he switched squads ahead of the 2016 season, moving from his own family-run team to Simon Belcher’s Handy Motorsport.

It wasn’t just a move of teams but it would also see Rob line-up on the grid in front-wheel machinery for the first time, as he swapped his Audi A4 for a Toyota Avensis.

“It was definitely a learning curve and it maybe took a little longer than we’d hoped,” he said. “We were following solid set-up advice initially but it became clear that we may be needed to go down a different route.”

After a series of troubled qualifying sessions at the start of the year, plus a number of occasions where Austin narrowly missed the chance of a reverse grid pole position, the team used the mid-season Dunlop tyre test to experiment with a new direction on set-up.

“Mid-summer testing at Snetterton was key,” he continued. “The first couple of changes didn’t do much, but just as we were about to start tearing our hair out we tried one last thing and it transformed the car – we found half a second instantly. From that change we haven’t looked back and have found more and more pace every time out during the second half of the season. The Toyota was a completely different car in the second half of the season.”

A podium at Snetterton followed, but it wasn’t until the final two events where Austin and Handy really showed their potential. Sixth in qualifying at Silverstone resulted in a podium in the opening contest, but it was his near pole position at Brands Hatch that really turned heads.

“It’s actually a little frustrating,” claimed Austin. “If we had gone on new tyres a couple of laps later I’m sure we could have had pole. In truth though it was a great result and we finally knew we had a front-running car underneath us.

“We took second in the first race at Brands and overall it was a positive end to the season. We really didn’t want 2016 to finish – knowing what I know now, how we developed the car and how I improved in a front-wheel drive car throughout the season – I was ready to go again the day after Brands.”

That has remained Austin’s stance ever since and he can’t wait to get back down to business in the 2017 Dunlop MSA British Touring Car Championship.

“We haven’t finalised everything but we’re working hard and we’re very positive,” he concluded. “Hopefully we’ll be in a position to announce our plans early in the New Year. The team are already fully prepared for the new season and maximising the pre-season testing opportunities will be key. I felt like I had been racing with a hand tied behind my back with the Audi and the pressure that goes with running the whole team. This year was a transitional/learning year, but if I can put the deal together and get back on the grid, in that car with Handy Motorsport, then I feel I’ll finally have a fair shot at this.”