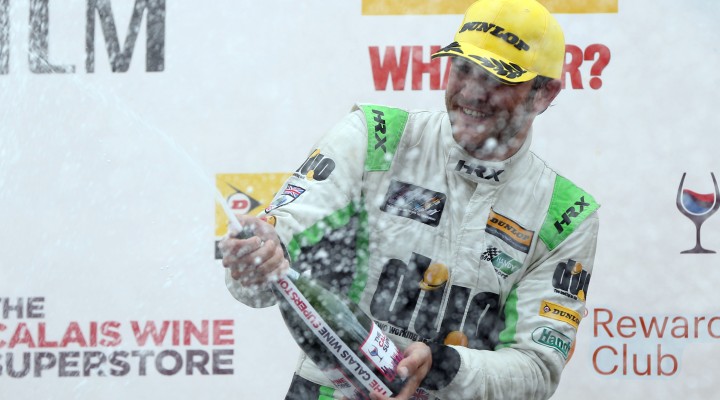 Handy Motorsport will retain the services of Rob Austin for the 2017 Dunlop MSA British Touring Car Championship season, as the podium-finishing partnership targets race wins and a sustained front-running challenge.

Austin’s confirmation behind the wheel of the squad’s Toyota Avensis for a second consecutive campaign in the UK’s biggest and best motor racing championship brings continuity for the team, off the back of its best-ever season in the BTCC last year.

The Evesham driver took Handy Motorsport to its maiden podium finish last year, adding two more rostrum results and a brace of Independents’ Trophy wins during the second half of the season.

Furthermore, the Wiltshire squad has moved its entire operation under one roof, to its main headquarters in Swindon. For the past three years, Handy has worked in partnership with Speedworks Motorsport but for 2017 it will be a true standalone entity.

“Firstly, I’m obviously very happy to be part of Handy Motorsport again for the new season”, said Austin, “We always knew there would be a learning curve relating to all aspects in 2016, driving, engineering, management and personnel. The BTCC is so competitive, all of these aspects have to be perfect to get to the front and I will admit it took longer than I expected.

“Our continuous improvement each time out through the second half of last season, though, capped off with a front row qualifying and a great podium at one of my weakest tracks to round the year off, shows that we just about got there in the end. There is no reason that form won’t continue, so it’s exciting to be going into the 2017 season with a car that can win and is so well supported.”

He added: “We have some exciting new partnerships in place and have retained the fantastic support from our existing partners, I can’t wait to show them off together with our exciting new livery at Autosport International.”

Hot on the heels of the fantastic news of Austin’s continuation in Handy colours, the fan-favourite will be appearing with team principal Simon Belcher at this week’s annual Autosport International Show at Birmingham’s NEC.

Regarded as the true start of the motor racing year, on the opening morning of the show on Thursday, 12th January, a stunning new livery for the squad’s Toyota will be revealed on the Dunlop BTCC stand (6440, Hall 6). Additionally, a brand new high-profile commercial partner will be announced on the first day, with confirmation of the team’s full portfolio of key backers.

Austin will appear across all four days of Autosport International and will take part in autograph sessions for fans fans as well as ‘Meet and Greet’ opportunities on the Legends Cars stand, which will be adjacent to the Dunlop BTCC stage.

“Autosport International is always the true start of the motor racing year and it’s a hugely important date on the calendar for Handy Motorsport”, commented Belcher, “We’re obviously delighted to be a key part of the Dunlop BTCC stand once again, and we’re looking forward to giving everyone the first glimpse of our stunning new livery – we think it’ll be pretty popular!

“It goes without saying, we’re absolutely elated Rob is staying with the team for a second season and we’re all aiming to build on the foundations we laid last year. The team got stronger and more competitive as the season progressed, Rob proved the car was quick and helped make history with our first podiums and Independents wins. We’re aiming higher still for 2017.”