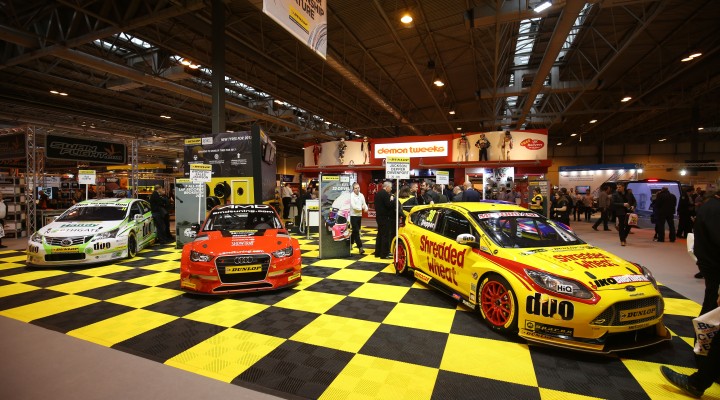 A busy schedule of key announcements was finalised in the lead up to the event and duly, from doors-open on Thursday morning, a string of cars and drivers were revealed as teams laid out their 2017 plans. On top of the announcements, Series Director Alan Gow took to the main stage as well as the BTCC stand alongside Dunlop’s James Bailey to speak on the season ahead, as did a clutch of drivers – eager to outline their prospects for 2017.

Halfords Yuasa Racing took the wraps off its challenger with triple title-winners Gordon Shedden and team-mate Matt Neal on-hand to do the honours, with a striking and stealthy black livery the direction the Team Dynamics-backed outfit will take for 2017. Simpson Racing, switching to the Team Dynamics stable this season after debuting under Speedworks Motorsport’s banner last year, also showed its Honda Civic Type R adorned in new colours.

Rob Austin confirmed his continued deal with Handy Motorsport on Wednesday and took the opportunity on Thursday at ASI to introduce a major new sponsor, Northgate plc. alongside a sharp re-imagining of Handy Motorsport’s green-and-white.

AmDTuning.com revealed the man that would be taking the wheel in its second car this coming campaign with reigning Renault UK Clio Cup champion Ant Whorton-Eales also on hand to help pull back the covers on the stunning-looking AmD Audi S3.

“As a rookie driver, the main target has to be the Jack Sears Trophy and it would be nice if we could be pushing towards the top ten in the championship by the end of the year,” Whorton-Eales said.

“Of course that won’t be easy and I’m aware that I have a lot to learn, but I also want to aim high and make the most of the opportunity I now have.”

Motorbase Performance, too, took the opportunity to show just who would be sitting in the other two of its Shredded Wheat Ford Focus’, with Mat Jackson already confirmed. Martin Depper joined the line-up with a wealth of experience, having made his BTCC debut in 2010. After a short absence, the Midlands-based driver returned to the series in 2014 with Eurotech and has become a regular points-scorer in the past three seasons.

Another new name on the grid for 2017, following Whorton-Eales announcement, 23-year-old Luke Davenport comes to the series from a successful sportscar background. Having worked his way through the Ginetta ranks, the Cambridge-based driver competed in the British GT last season, piloting the factory-team’s G55 GT3 and will be challenging for the Jack Sears Trophy during his maiden BTCC season.

Finally, West Surrey Racing-supported Pirtek Racing revealed what the latter’s colours would look like wrapped around a BMW 125i M Sport. The now-trademark blue and orange scheme is always a favourite among BTCC fans – particularly followers of long-time Pirtek and new-to-WSR man Andrew Jordan – who were suitably impressed with the results.

Much more is to come over the next three days from the NEC. There will be further interviews with a host of BTCC personalities – drivers, key team personnel, partners and leading figures from the championship including Series Director Alan Gow, Dunlop’s James Bailey as well as ITV Motorsport’s team.

When doors open to the public on Saturday and Sunday, there will be autograph and selfie sessions where fans will get a chance to meet their heroes. On the subject of selfies, we’ll be running a competition throughout the show where fans, using #BTCCSelfie, can send in their best BTCC-related shots from all over the show floor to be in with a chance of winning a money-can’t-buy experience.

The best #BTCCSelfie will receive two tickets, a grid walk, a garage tour plus a photo with your favourite driver at the Donington Park race weekend in April.

Donington Park will also be offering fans an exclusive ticket offer over the course of the event via the Dunlop BTCC stand (Stand 6440 in Hall 6).