Black is the new orange at Halfords Yuasa Racing 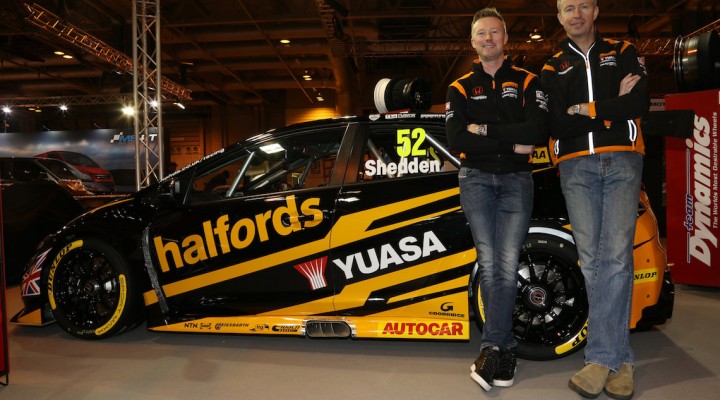 Honda is the most successful marque in the modern era of the BTCC – commonly regarded as the world’s toughest tin-top series – having sped to no fewer than six Drivers’, five Manufacturers’ and six Teams’ titles since 2005.

Last year, Shedden battled his way to back-to-back crowns behind the wheel of the potent Civic Type R, with Halfords Yuasa Racing team-mate Neal only ruled out of title contention on the final day of the season.

With no reason to change a winning combination, the two men will head into their eighth consecutive campaign together in 2017 chasing sustained success for Halfords Yuasa Racing.

Shedden will be bidding to become the first driver since Andy Rouse more than 30 years ago to triumph three times in swift succession, whilst Neal proved last year that even as he prepares to enter a record-extending 27th BTCC season, he remains every inch a force to be reckoned with.

Gordon Shedden said: “I always feel like we’re a little in the lap of the gods at this stage of the year, waiting to see what weird and wonderful things the engineers have come up with over the winter. The Civic Type R was already an excellent all-round package last year, so we’ve adopted an approach of evolution rather than revolution because there’s no point in trying to reinvent the wheel – although there are definitely some developments in the pipeline.

“There have been a few subtle rule changes over the off-season and it will be interesting to see how the new Dunlop tyre performs – Matt did the majority of the running on it from our side last summer – because everybody will need to get their head around it as quickly as possible.

“As far as I’m concerned, going into a new season as the defending champion is the best position to be in and I’m hopeful that we will be there or thereabouts from the outset – even if we fully expect the competition to be tougher than ever this year. It never ceases to amaze me how people constantly raise their game in this championship, which is reflected in the quality entry list that the BTCC invariably attracts – and that’s what makes it so unpredictable and exciting. With the variables of success ballast and reversed grids, you’re not going to win every race so it’s all about playing the long game.

“It would be fantastic to mirror Andy Rouse’s achievements – he is a true legend of touring car racing – but there’s a long way to go yet and ultimately, we need to just focus on ourselves. I can’t wait to get started!”

Matt Neal said: “I think our new livery looks really striking and aggressive – we’re going for a ‘stealth-like’ approach this year! I’m feeling strong, I’m feeling fit and I’m excited about the season ahead. We always try to re-evaluate every area over the winter. Development is very restrictive in the BTCC on both the chassis and engine side, but we have been pushing hard in all departments and making good progress. As we proved in 2016, the Civic Type R is a superb all-rounder, and we are optimistic of being on the pace at every circuit again – plus, consistency has always been one of my strong suits.

“One of the biggest question marks heading into the new season will be over who adapts best to the new Dunlop tyre and in that respect, I think the inter-team rivalry with ‘Flash’ will be fascinating. Notwithstanding the final outcome, I felt I had the edge over him last year after several seasons where he had generally been quicker than me, but you can be more aggressive on the 2017-spec tyre which might swing the balance back in his favour as that will likely suit his driving style slightly better than mine – so I’ve got a bit of homework to do in that respect!

“I’m not underestimating any of our opposition, and I’m under no illusions about the challenge we are facing. It’s going to be another extremely tough fight and I’m not discounting anybody from the equation. I’m always wary of being over-confident because confidence breeds complacency, but I’m happy with our preparations so far and I think we’re in a good place.”

Dave Hodgetts, Honda UK Managing Director said: “The Honda works team, Halfords Yuasa Racing, has had a successful couple of years and we are back in the 2017 season once more with our championship-winning Civic Type R. With this new livery unveiled at the Autosport International Show, the team is prepared well in advance for the start of the season in April and we will be gunning for glory!”