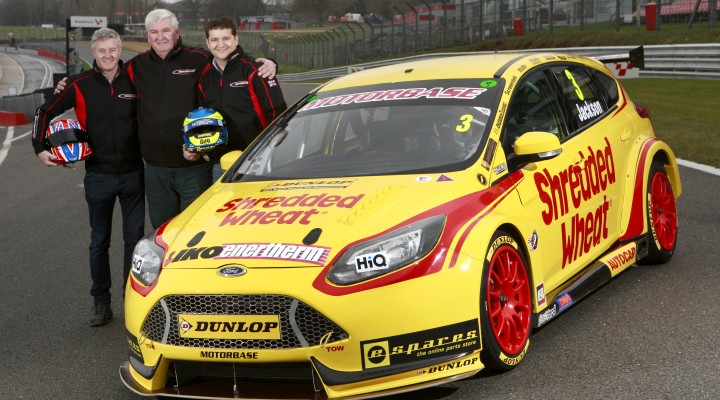 The trio were officially confirmed on the Dunlop BTCC stand during the opening day of the annual Autosport International Show, with Motorbase Performance Team Principal David Bartrum also taking the wraps off the striking new Shredded Wheat livery that will adorn the outfit’s Ford Focus STs for its 2017 championship campaign.

“We’re absolutely delighted to announce our new driver line up for the 2017 season,” commented Bartrum. “This season is arguably our biggest yet in the BTCC. Having signed a multi-year deal with household brand, Shredded Wheat, as well as continuing with our key partners from last season – DUO & IKO Enertherm – our focus is very much on the long-term plan.

“After securing our first-ever BTCC titles in 2016, we have one clear aim for 2017 and that’s the overall title,” continued the team boss. “It’s fantastic to have Mat back for his eighth season and his return is key to us mounting a successful championship challenge this year. We now have a formidable trio with Martin and Luke joining him and have three drivers who we would very much like to continue with us beyond the 2017 season.”

Depper joins the line-up with a wealth of experience, having made his BTCC debut in 2010. After a short absence, the Midlands-based driver returned to the series in 2014 with Eurotech and has become a regular points-scorer in the past three seasons.

“Martin has been in the championship for a while now, so he knows exactly what to expect,” added Bartrum. “He tested the Focus at the end of last season and quickly got up to a strong pace in the car. We were equally reassured with his pace and ability both driving, and tuning the car to his liking. I’m sure we’ll see him fulfilling his potential as a BTCC driver this year and providing a few surprises along the way.”

“I’m over the moon to be joining the Motorbase team for the 2017 campaign,” said Depper. “When I tested the Focus back in November, I quickly found pace in tricky conditions, so I’m really looking forward to carrying that forward and making my fourth season in the BTCC my best yet. I’m also really excited to be partnering Mat and Luke as I’m sure we will work well together and show real strength in our team work.”

A new name on the grid for 2017, 23-year-old Davenport comes to the series from a successful sportscar background. Having worked his way through the Ginetta ranks, the Cambridge-based driver competed in the British GT last season, piloting the factory-team’s G55 GT3 and will be challenging for the Jack Sears Trophy during his maiden BTCC season.

“Luke is a really exciting young driver who is ready to rise to the new challenge,” Bartrum explained. “His pace is without question and I’m sure he will be making waves as soon as the flag drops at Brands Hatch. His approach during his initial test impressed us from the start and his driving ability and detail both in and out of the car was the best we’ve seen for a long time, so we’re really looking forward to his showing.”

The rookie added: “It’s great to be back on the TOCA package after racing GTs for the past couple of seasons. I have fond memories from racing in the Ginetta Supercup in 2014 when we won the Teams’ Championship with United Autosports and there’s really nothing quite like the buzz of the BTCC. If you’re involved in British Motorsport you can’t help but keep an eye on the BTCC and the incredible reach and impact it has. I feel incredibly privileged to get the opportunity not only to race in the UK’s leading series but to also be joining a front-running team in my rookie year. There’s a great atmosphere within the Motorbase team and their results speak for themselves.

“I have to say a big thank you to Alex at DUO for helping to put this deal together;” continued Davenport. “DUO has supported me since 2014 and they’ve been essential to my development as a driver and helped me to reach the stomping ground of the BTCC. I hope to repay that support with some great results this year.”

An extensive winter testing programme is next on the agenda for Motorbase with the team making final preparations before heading to Portimao next month ahead of the official BTCC Season Launch at Donington Park on 16 March. The 2017 Dunlop British Touring Car Championship gets underway at the Wrotham-based squad’s local circuit, Brands Hatch, 1-2 April.