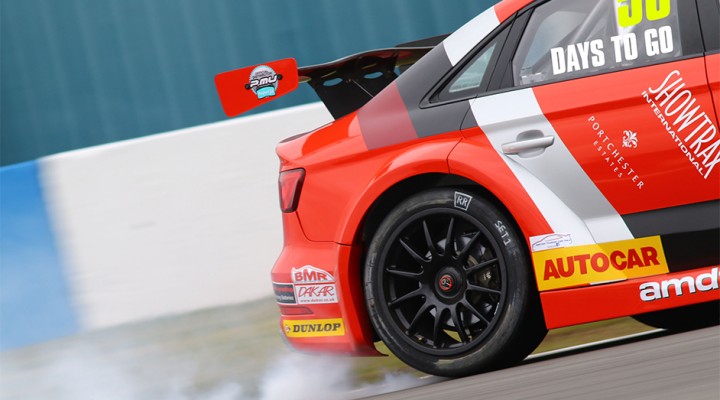 With just 50 days to go until the 2017 Dunlop MSA British Touring Car Championship is kick-started at the annual Donington Park Season Launch, pieces of the jigsaw are being put into place as teams and drivers finalise their programmes for the campaign ahead.

As is always the case, it’s been a packed off-season so far with announcements and unveilings aplenty – Motorbase Performance and Andrew Jordan’s parting of ways back in late October set the wheels in motion.

It was an amicable parting of ways with both parties coming to an arrangement by mutual consent. Jordan had enjoyed a successful stint in the Ford Focus, with two outright wins and a trio of podiums on his way to securing a third Independent Drivers’ title.

Into November, and some familiar machines returned to Team HARD’s workshops – three Volkswagen CC’s. The Kent-based squad originally built, prepared and ran the cars in the BTCC back in 2013.

Team Principal, Tony Gilham, was delighted to be re-united with the cars and believes they’ll be a force to be reckoned with after a planned upgrade to RML specification.

“Bringing the VWs to the BTCC was our brainchild back in 2011, so it feels like we have some unfinished business with them,” he said. “It was a good car out of the box then and was still winning races last season with the older kit onboard. Now we plan to update all three VWs to the RML-spec over the winter and believe we’ll have a really strong package.”

In further news, Gilham announced that Will Burns would be a new member of his outfit for the forthcoming campaign. The 2016 Michelin Ginetta GT4 Supercup runner-up making the step up to the BTCC following perhaps the most successful of five seasons in the single-make Ginetta competition.

Midway through November, and Aiden Moffat confirmed his continuing entry in the Laser Tools Racing Mercedes A Class. “The BTCC is where we’re going to stay,” said Moffat. “It’s a fantastic championship and as a team we’re constantly improving.”

Having jump-started the merry-go-round in October, Andrew Jordan put rumours surrounding his final destination to rest as he joined West Surrey Racing. The former BTCC title winner will race the latest development of the WSR-designed-and-built BMW 125i M Sport – which won both the Teams’ and Manufacturers’/Constructors’ championships this season – in both 2017 and 2018.

The following week, he spoke to btcc.net following a full day’s testing at Brands Hatch to get a handle on the BMW.

November proved to be a busy month in the BTCC. Matt Simpson made his intentions clear for the forthcoming season after he announced a partnership with Team Dynamics would be on the cards for 2017, having entered the championship with the backing of Speedworks Motorsport for his maiden campaign.

Adam Weaver Managing Director of Automotive Brands, Team Principal of Power Maxed Racing said: “We are incredibly pleased and proud to be working with Vauxhall and to be the team that brings this iconic and highly successful brand back to the BTCC. The all new Astra is a fantastic car and it is no surprise that it was voted 2016 European Car of the Year – it will make a show-stopping BTCC challenger.”

Shortly afterwards, Senna Proctor was unveiled as the first of PMR’s new drivers following the departures of Kelvin Fletcher and Hunter Abbott.

On 23 November, AmD Tuning’s Ollie Jackson re-signed for 2017, driving what is set to be an updated Audi S3 – equipped with new RML parts. It also became clear a week later that the outfit would be expanding its operation to two cars for the new season.

With December looming, Team HARD’s plans then took a further step towards finalisation with the return of Michael Epps. “You know, I was a little concerned about being a one season wonder in the BTCC, especially being such a tough season, but I’m glad I was able to make an impression and create a 2017 campaign out of it,” said Epps.

On 5 December, Series organiser TOCA confirmed the allocation of all TBLs for the coming season and that entries had then closed. All 32 TOCA BTCC Licences were allocated. With that confirmation, it became clear that Motorbase Performance would be expanding its operations to a three-car attack.

The Kent-based squad then announced a new title sponsor set to adorn its three Fords – Shredded Wheat – along with the re-signing of Motorbase stalwart Mat Jackson, after what was a successful 2016. Team Principal David Bartrum said of the sponsorship deal: “I’m very much looking forward to building a strong relationship with the Shredded Wheat brand. The standout on the car looks fantastic and it certainly won’t be missed on track.”

Into the second week in December and BTC Norlin Racing joined the fold as a new outfit, running a brace of Chevrolet Cruze cars. The Northern Ireland-based team has a multi-year deal with a leading hotel development company, Norlin, and recruited Chris Smiley as its first driver and Dave Newsham its second.

On to 19 December, and Power Maxed Racing finalised its driver pairing with Tom Chilton’s return to the BTCC. Tom Chilton said: “I am delighted to be back in the BTCC, I have continued to watch as a fan while racing in World Touring Cars and the itch to get back behind the wheel on British soil has never gone away. So you can imagine how excited I was when Adam got in touch, plus to get to return in a Vauxhall Astra, a car that I know and love is a dream.”

After a minimum of respite over Christmas and New Year, preparations continued apace. WIX Filters generated the first story of the New Year with the news that they would be returning as backers at WIX Racing for Adam Morgan’s 2017 tilt. “I am over the moon,” said Morgan.

Then came Autosport International. Traditionally a hotbed of announcements and unveilings, this year’s Dunlop BTCC stand did not disappoint. On the eve of the show, a flurry of action took place. Jeff Smith was confirmed at Eurotech Racing, Tom Ingram at Speedworks Motorsport, Rob Austin at Handy Motorsport and finally Ant Whorton-Eales at AmD as second driver.

Covers off time at ASI was to follow. Triple champions Gordon Shedden and Matt Neal revealed a stealthy-black new look for its Halfords Yuasa Racing Honda Civic Type R. Matt Neal said: “I think our new livery looks really striking and aggressive – we’re going for a ‘stealth-like’ approach this year! I’m feeling strong, I’m feeling fit and I’m excited about the season ahead.” Gordon Shedden added: “As far as I’m concerned, going into a new season as the defending champion is the best position to be in and I’m hopeful that we will be there or thereabouts from the outset.”

Rob Austin and Simon Belcher of Handy Motorsport were thrilled to unveil a major new partner and reimagined livery at the show – with Northgate joining the outfit.

With Andrew Jordan confirmed to be racing with WSR, fans of the Midlander would be keeping a keen eye on what the popular Pirtek Racing livery would look like on the BMW 125i M Sport. On day one of the show, off came the covers.

Livery unveils completed, for now, attention once again turned to drivers. Motorbase’s business was completed with the news that Martin Depper would move from Eurotech Racing and Luke Davenport would join the stable.

Then, news broke that Colin Turkington and Team BMR had agreed to part ways. “I have thoroughly enjoyed my time at Team BMR and will savour the success we shared together over the past two seasons,” said Turkington. “However, the time has come to part company and apply the focus to each of our own individual goals and needs.”

Bringing things right up to date was the news this week that Jack Goff would be heading Eurotech’s way. “We are delighted to have been able to put together a deal with Jack,” said Eurotech Team Principal Jeff Smith. “We have been in talks with many drivers over the winter which has been a long process, but we wanted to get it right. Our aim was always to put a talented young gun in to the second seat which we have undoubtedly managed to achieve with Jack.”

Announcements are still to follow, so keep your eyes here at btcc.net and across our social media channels in the run up to Season Launch on 16 March.