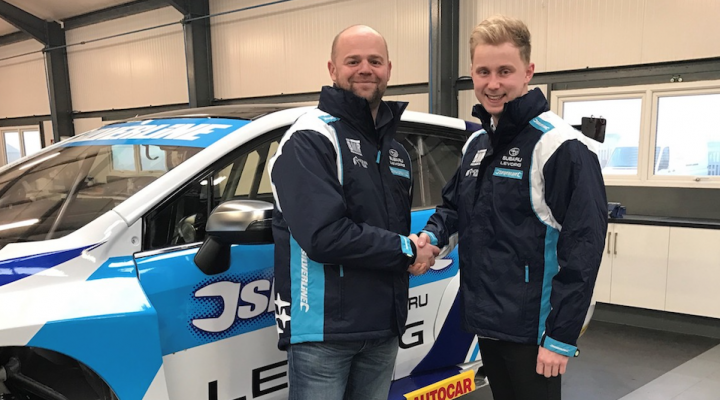 Team BMR has finalised three of its four drivers ahead of the 2017 Dunlop MSA British Touring Car Championship, with Ash Sutton joining Jason Plato and James Cole in the outfit’s Subaru Levorg GTs.

Sutton, 23, joins the Manufacturer team from Triple Eight Racing following a strong first campaign in the BTCC – finishing as the best placed rookie and lifting the coveted Jack Sears Trophy as a result. From the outset, the Hertfordshire racer made his mark with an impressive fourth place finish on his debut at Brands Hatch back in April last year and his success continued throughout the season, leading to a maiden win in a wet race three at Croft.

Then came two further podiums, two pole positions and two fastest laps in the remainder of 2016. At the season finale in October, he sealed the JST, a trophy he led dominantly over the whole campaign.

“I am over the moon to be offered such a great opportunity,” said a delighted Sutton. “I joined the Team BMR Academy at the end of 2014, signing a two-year deal to race in the Renault UK Clio Cup, with a view to working our way up through the 2015/16 seasons.

“Not for one second did I think that two years down the line I would be a part of the BMR factory team; let alone with a BTCC Manufacturer like Subaru. I thought I had hit the jackpot in my debut season in securing a Manufacturer drive; but now being a part of Subaru, and the package that comes with that, has certainly topped it for me.

“Last year I accomplished all of the personal goals I had set for myself. I know that 2017 is going to be hard, but I feel I have all the correct tools to move those goal posts and set myself some bigger challenges. Going into the final round in with a shot for the championship is the biggest aim – but this is the pinnacle of British motorsport, it’s the British Touring Car Championship, so I know it’s not going to come easy!”

On the prospects of returning to rear-wheel drive and working with Jason Plato, he added: “I have been asked what my thoughts are on jumping into a rear wheel drive car and to be completely honest I am I’m going back to my roots. I have only had two years in front-wheel drive throughout my whole racing career, so I can’t wait to be back where I belong. I’m looking forward to the intense testing programme we have planned.

“Working alongside Jason, someone I have always looked up to, is something of an added bonus for me. There are three things that have made this Academy journey come alive, those being; my family, all my loyal sponsors, and Warren Scott himself for giving me this opportunity. All I can say now is, roll on Brands Hatch!”

For Plato, 2017 will be his third consecutive year with the team and another BTCC milestone will be coming his way – this year, he will be celebrating 20 years since joining the championship in 1997.

Jason remains the most successful driver in the history of the championship to date, taking several podiums in 2016 with the all-new Subaru Levorg GT – including a maiden Subaru pole position to mark the start of his 500th BTCC race which he won with an impressive lights to flag victory, the 95th of his career.

“I predict 2017 will bring much success, I’m energised and looking forward to fighting for the championship,” said Plato. “Our team goes from strength to strength. We have a fantastic new addition to the squad in young Ash Sutton, I’m certainly expecting him to be right in the thick of the action. Testing begins in two weeks and I can’t wait.”

James Cole joined BMR in 2016 after switching from Motorbase Performance and will remain for a second year in what will be his fifth season in the BTCC. The team appreciated his wealth of knowledge, doubly valuable last year in developing the debuting Levorg. Cole has already completed a two day test at Donington Park this off-season.

Cole said: “Winter testing was a revelation. I worked with Jason’s engineer, Carl Faux, and wow, it felt like I was in a racing car again. It just felt right – the balance, my confidence. I can’t wait to get back in the car and build on what I learned in testing. I need to deliver for the team and myself. Jason and Ash are quality team mates and I relish the challenge to work and compete with them and help Team BMR to win championships in 2017.”

An announcement with regards to the outfit’s fourth driver will be made in the coming weeks.