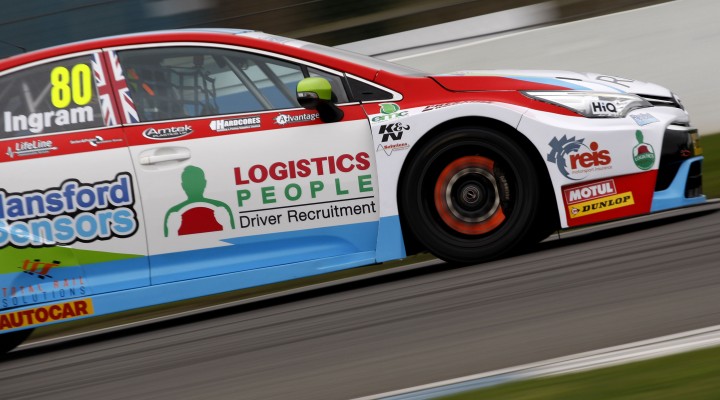 The most successful grid in the series’ history had been confirmed during the Season Launch event at the Leicestershire venue, with an incredible 16 race-winners included among the capacity 32-car line-up.

It was Ingram who earned the early bragging rights as he impressively led a Toyota one-two, ahead of Handy Motorsport’s Rob Austin.

Ingram’s newly facelifted Avensis set the pace throughout much of the four-hour long session, with Austin also backing up the Toyota’s credentials with his own stellar lap.

BTC Norlin Racing – new entrants for 2017 – starred during the test, as Chris Smiley took third in his Chevrolet Cruze, whilst race-winner Adam Morgan was just 0.004s behind in the Mac Tools-backed Mercedes A-Class.

Series returnee Tom Chilton was the first of the manufacturer drivers on the timesheets, as the all-new Power Maxed Racing Vauxhall Astra ran extremely well on its first official outing.

Dave Newsham made it two BTC Norlin Chevrolets in the top ten as he pipped Ollie Jackson’s AmD Audi S3 to claim ninth.

A number of the big guns failed to show their true pace with champion drivers Gordon Shedden, Colin Turkington, Matt Neal, Jason Plato and Andrew Jordan all finishing down the order.

The hugely competitive field was able to provide a sign of things to come with some 18 drivers separated by less than a second. Thirty cars completed laps during the session, with more than 1,200 laps clocked throughout the field.

Two of the five young rookies on the 2017 grid – Luke Davenport and Will Burns – endured trips into the gravel on the day but both drivers gained valuable experience ahead of their upcoming BTCC debuts.

Final preparations will now be made before the field makes its way to Brands Hatch for the opening rounds of the 2017 Dunlop MSA British Touring Car Championship on 1/2 April.

Tom Ingram said: “I’m obviously happy with that. It goes to show that the immense amount of hard work put in by all the Speedworks boys over the winter has paid off. We had strong pace throughout and managed to get a lot done today in terms of the car balance and race distance runs. It’s been a good start.”

Rob Austin said: “We just went about our business today and the Avensis feels really good. We went out on old tyres to begin with. I thought I heard ‘P10’ over the team radio, which I was quite happy with but it turned out to be P2. Today’s by no means the full picture, of course, but it’s a good indicator.”

Chris Smiley said: “Today was the first day I’ve driven my own car but I felt comfortable straightaway. I didn’t even hook my best lap up properly because I made a mistake. Okay, it’s not a race weekend but this gives the whole team a boost going to Brands Hatch as it proves we’re not far away. We’re in the mix.”

Adam Morgan said: “To end up with two Mercedes’ inside the top six is always encouraging. We managed to diagnose and eradicate some of the issues that have cropped up in previous tests, and we continued to experiment with different set-ups and get used to the new tyres. Overall, I’m very happy.”

Jack Goff said: “It’s great to finish today inside the top five, although on my last lap I was two-and-a-half tenths up again before hitting traffic. Obviously it’s always tricky to tell at this stage because you never know what ballast levels different people are running but I think we’re there or thereabouts.”