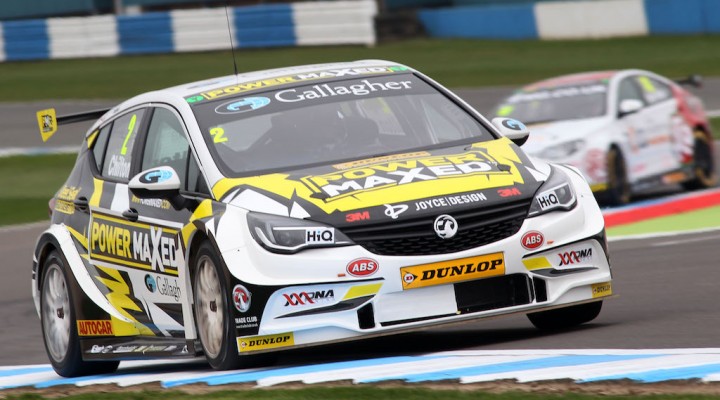 Power Maxed Racing is fresh off the back of an encouraging week of testing with its new Vauxhall Astra, garnering valuable track time ahead of the season-opening Brands Hatch weekend in a fortnight’s time.

The team completed some 60 laps in Leicestershire alone, between drivers Tom Chilton and Senna Proctor, having made headway with the car between an initial outing at Donington Park and last week’s Season Launch pre-season test session on Thursday. This was followed by the next stop on their programme at Snetterton a day later.

PMR continues to hone its pair of Astras, with BTCC returnee Chilton encouraged by the progress that has so far been made, having lapped within 0.6s of the benchmark time set by Speedworks Motorsport’s Tom Ingram at Donington.

“Out of the box the car felt there or thereabouts,” said Chilton. “We made some changes and I went a few tenths faster, then faster again – gradually getting it to where we want to be. It still needs a little bit more refinement but it’s quite close to the sweet spot just by feeling where it is now.

“I drove the car two weeks ago for the first time and the boys were working on it until two in the morning – the remit then was just to go and do lots of laps. Now we’ve had time to scratch our heads and do lots behind the scenes, we’ve got a nice base setup. We need to get to a state where we can go from that base and go to any circuit, fine tune and go from there. We’re getting close to that now.”

Chilton was delighted to be back behind the wheel of some BTCC machinery, and particularly to be racing on behalf of a Manufacturer with which he enjoys a special relationship.

“Matt Neal was out on hard tyres doing a race run, I think, and I was within one or two metres for a few laps. I out-braked him at the first corner to sort of say “I’m back!” then I held a drift down through the Craners and Old Hairpin just to show I can still drive after being away for five years!

“I love driving British Touring Cars. I love the fans and I’m loving the fact I’m back with Vauxhall too so I’m hoping I can go and win some races.

“Vauxhall is the best manufacturer we’ve seen in the BTCC. Not just for the hard work and commitment we’ve seen from them but for the Championships they’ve won too. Last time I was with them we won the Manufacturers’ title, alongside Fabrizio Giovanardi and I’d love to do it again – I don’t want to let them down.”