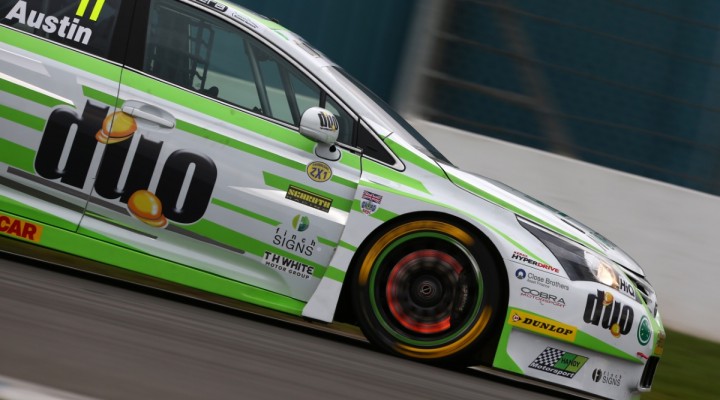 Handy Motorsport is nearing the end of a bumper winter testing schedule that has seen Rob Austin take in near half of the circuits on the Dunlop MSA British Touring Car Championship calendar, as fine tuning of the outfit’s Toyota Avensis continues.

The team has spent a week lapping this off-season, visiting Brands Hatch, Snetterton, Oulton Park and Donington Park. With hundreds of laps now in the bank, Handy is confident building on a strong end to 2016.

An early-season issue with the Toyota’s setup last year, whereby the team followed a philosophy that did not transpire to suit Austin, was rectified mid-season. Multiple podium finishes through the second half of the season and a front row in qualifying at the finale demonstrated an impressive rate of progress for the team who ended the season on a high.

At last week’s Donington Park Season Launch test session, the outfit underlined its potential heading into the 2017 campaign, with Austin notching the second fastest time on the day – just 0.1s shy of the benchmark.

The Evesham racer worked through a comprehensive programme on the day, forming the final throes of his preparation for the season ahead.

“Donington was a good indicator, but it’s by no means the full picture,” said Austin, “We were confident we had good pace in the car and the test proved it, but I know there’s no way all of the works Hondas, Subarus and BMWs will be outside the top 10 come Brands, as they were at Season Launch.

“Our plan was to just go about our test programme as though nobody was watching and at the end of the day see how we stacked up. To be P2 was a pleasant surprise considering I had made such a mess of our new tyre run that we had actually set our fastest time of the day on old tyres, so there was plenty left on the table.”

A largely unbroken four-hour block of testing, gave Handy Motorsport the opportunity to undertake a lot of mileage where race set-up was the paramount consideration.

Team Principal Simon Belcher added: “We ran the hard tyres mostly, did a lot of laps on those and only did one new tyre run, so to be P2 we’re happy with that. There was more time to be had but there are no prizes for the test day, it’s in a couple of weeks where that counts.

“We focused on a lot of longer runs and everything is looking really good ahead of Brands, it’s confirmed what we thought during the pre-season. Overall for the day we’re really happy and very excited ahead of the first round.”

With the 2017 campaign less than a fortnight away, Austin confident his Toyota Avensis has the capability to qualify and more importantly, race competitively enough to mount a challenge this season.

“I’m certainly confident going to Brands”, he commented, “I’ll try to qualify on pole, of course, but this is an extremely competitive year and cannot be underestimated, so realistically I will be happy as long as we can qualify in the top 10. We’ve developed an extremely strong race car and I believe that if we can start in the top 10 on Saturday then we will be set for a very exciting Sunday.”