Mega mileage for Motorbase as testing draws to a close 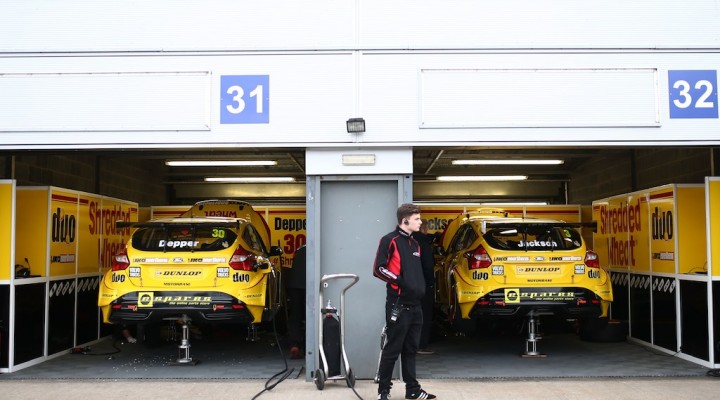 The Kent-based outfit, with its trio of Ford Focus STs piloted by Mat Jackson and newcomers Martin Depper and Luke Davenport, has clocked up an impressive 4,500 kilometres with an astounding 100 per cent reliability record in the run up to next weekend’s season opener at Brands Hatch.

Focus was on understanding Dunlop’s new tyre compound and construction over a three day test at the Algarve International Circuit in Portimao, Portugal in February before returning to the UK for further running at Brands Hatch, Donington Park and Oulton Park.

Team Manager Oly Collins hailed what has been a highly productive BTCC off-season.

“The way that we’ve approached this testing programme this year has probably been the best for us whilst competing in the BTCC,” said Collins. “It’s been great having the benefit of all three cars running and we’ve averaged over 1,500km in each car, which collectively is around the same as a full season in the BTCC.

“The reliability of the cars throughout has been great as usual thanks to the guys in the team.

“The guys have yet again done an outstanding job of building the third car. It often gets overlooked as the Motorbase cars are so reliable but it’s a real testament to the level of talent within the team and their meticulous work ethic that they always turn out a cracking car.

“A lot of work and development has gone into the cooling system this winter. We’ve been working very closely with Mountune and Pro Alloy, making improvements and trying to find any edge at all over the competition.

“We finished last year with a pretty good car at every circuit and everything we learnt has some relevance going into this year, but it’s all about tuning this into the new tyre. We’ve also got the hard compound tyre which is going to be used more frequently this year.”

“We’ve had a great warm-up to the season starting and everyone is upbeat heading into the first round at Brands Hatch,” said Jackson. “Having such an extensive programme in place has helped us to try some new things on the Focus and also given us that all-important bit of extra track time to get our heads around the new tyre.

“We know that we have a strong package and hopefully the changes that we’ve made this winter should hold us in good stead going into the new season.”

Meanwhile, new charges, Depper and Davenport, have both settled into new surroundings and are aiming for strong campaigns ahead.

“The team are all great guys and I think we’re gelling together well. I feel sure that this year is going to be a great year on and off track.”

“We’ve had a really good pre-season and the support from DUO and Shredded Wheat has allowed us to get some good mileage under our belts, which has been great in terms of seat time for me and allowing me to get used to the car,” added Davenport.

“I’m fortunate to have Mat and Martin there for feedback and the three of us have worked together well.

“I’m going into the opening round with good knowledge of the car and I feel as well-prepared as I can be! The new tyre has levelled the playing field a little this year; it’s also allowed me to settle in and to be able to contribute valuable feedback. I’ve been amazed by the reception from the BTCC fans and the support is brilliant – it’s given me a lot of confidence coming into the BTCC for my first season.”