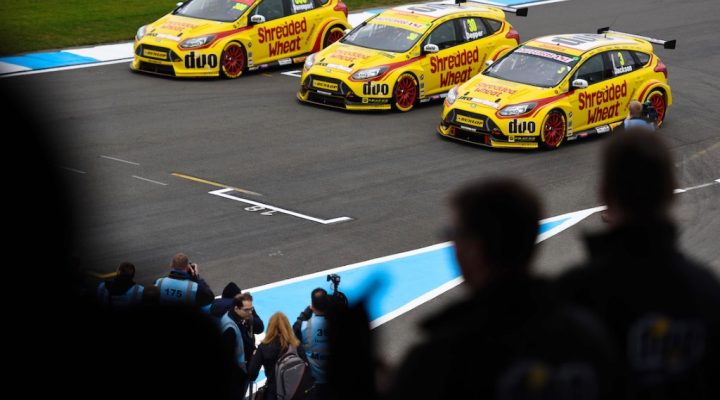 Team Shredded Wheat Racing with DUO is gearing up for the return of the Dunlop MSA British Touring Car Championship this coming weekend as the hotly-anticipated 2017 season gets underway at the iconic Brands Hatch circuit (1-2 April).

The Motorbase-run trio of Ford Focus STs piloted by Mat Jackson, Martin Depper and Luke Davenport faces fierce competition this year, with a capacity grid of 32 cars confirmed for the campaign. Five former champions will be challenging for the coveted BTCC crown, and with an incredible 16 race winners lined-up, the Wrotham-based outfit is preparing for its most competitive season to date.

“BTCC is back!” commented Team Boss David Bartrum. “After a long and busy winter, the new season is upon us and I feel we’re ready for our strongest attack on an outright championship victory. We celebrated our best season ever last year and we’re ready to take it to the next level.”

2016 ended on a high note with the Motorbase squad securing both the Independent Teams and Drivers’ titles to commemorate its 10th Anniversary of racing in the BTCC.  The Focus ST was also one of the best performing cars on the grid, clocking up 7 wins and 7 podiums with Mat Jackson topping the table of most race wins for the season whilst leading the most laps throughout the 30-round crusade.

“We’ve strengthened the team in all areas behind the scenes over the winter;” Bartrum continued. “We’ve had a good pre-season test program, our strongest to date, and we’ve got three eye-catching yellow Team Shredded Wheat Racing with Duo cars ready to do battle.  All three drivers are up for the challenge so it’s time to let the racing do the talking!”

The Focus ST has undergone a number of improvements and developments over the winter with the Team Shredded Wheat Racing with DUO squad clocking up over a season’s worth of mileage during its intense pre-season test programme.

“The whole grid has become even stronger over the winter;” explained Bartrum. “Driving standards have improved, the competition is even stronger and it’s all adding up to be another fantastic campaign. Lots of teams have carried out testing over the winter and they all have the same aim as us, so Brands is going to be an absolute classic! I feel sure it will be a very close season and reliability and consistency will be the key to glory when we return to Brands Hatch in October.”

Mat Jackson said: “We’ve got some great mileage behind us from testing and we’ve learnt a lot about the new Dunlop tyres so it will be interesting to see how it all plays out on the track this weekend. We go into the weekend in a good place, we know we have a strong car in the Focus and the changes we’ve made over the winter should help to keep us on the edge but this year is going to be closer than ever.

“This is the by far the strongest grid we’ve seen in a long time and the wins and podiums are going to be even harder to come by. Brands has been kind to us in the past and a strong start in qualifying is going to be pivotal in getting our campaign off on the best footing.”

Martin Depper said: “I’m really looking forward to getting back out on track this weekend. We’ve had a great test programme and the new Dunlop tyre has given us a few more things to think about, but I’m sure it’s going to be great for the racing and make the grid even closer this season.

“Brands is really going to be interesting, everyone has had a busy winter and played their cards close to their chest so it’s all to play for when all 32 cars get together on the same piece of tarmac for the first time this weekend!”

“I do feel like I can be a contender for the Jack Sears Trophy this season but my targets for this weekend are to perform above the team’s expectations and to do the sponsors proud. Any pots that I pick up along the way are a bonus!”

The 2017 Dunlop MSA British Touring Car Championship season gets underway with rounds one, two and three held at Brands Hatch Circuit, Kent on 1-2 April. Live coverage of Sunday’s events will be shown on ITV4, ITV4HD and via the ITV Hub from 10:15 – 18:15; with itv.com/btcc featuring live timing and streaming of Saturday’s qualifying session between 15:40 – 16:10.