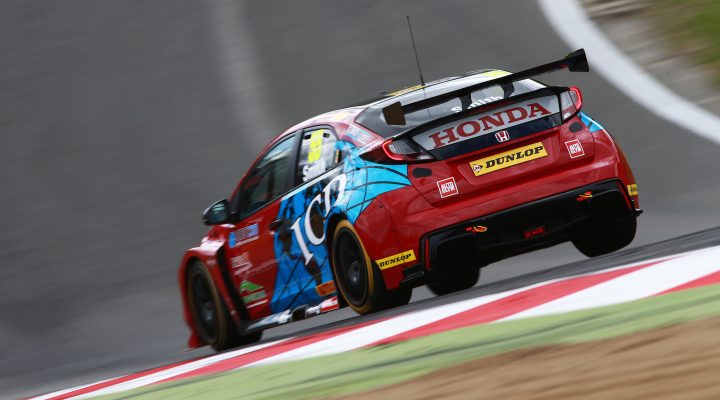 A disjointed opening qualifying session of the 2017 BTCC season was interrupted by incidents and inclement weather, as drivers and teams strived to be on track at the perfect time.

It was Smith and Eurotech that played the right hand as the Honda Civic Type R crossed the line shortly before a deluge of rain fell at the Kent venue. This had followed two earlier stoppages for separate incidents at Paddock Hill Bend, which saw the Chevrolet of Dave Newsham and Subaru of Ashley Sutton beached in the gravel.

Rain came and went throughout much of the running, but it was the shower following Smith’s lap that would scupper any chance of further improvement. The Midlander’s performance should not be underestimated, however, as his 48.367s lap time was just two tenths shy of Tom Ingram’s practice benchmark, despite the afternoon’s less-than-ideal conditions.

Speedworks Motorsport’s Ingram backed up his own pace-setting performance in practice by taking an impressive second in qualifying, whilst the Halfords Yuasa Racing duo of Gordon Shedden and Matt Neal will line up on the second row for tomorrow’s season-opener.

Reigning champion Shedden and team-mate Neal both had to recover from wild rides across the grass on the exit of Surtees, as did the likes of Rob Collard and Ollie Jackson, with the entire 32-car field trying to manage the ever-changing atmospherics.

Former champions Andrew Jordan and Jason Plato had to settle for 11th and 18th respectively for BMW Pirtek Racing and Adrian Flux Subaru Racing, whilst Vauxhall’s BTCC race return will commence from 12th and 16th on the grid with Tom Chilton and Senna Proctor.

Jeff Smith said: “Matt Neal was in front of me and I just managed to tuck in behind him for a couple of laps. One of them was quick enough for pole as it turned out. I’ve been on pole before from a reverse grid but I head into every qualifying session believing we can do it, it’s just about executing it. FP1 was a bit of a disaster for us but since then, the car came into its own and it’s been stunning this afternoon. I must admit, I’ve left it to the guys over the winter to sort things out behind the scenes and they have just done a fantastic job. A lot of work has gone in and on my side, I’ve been focussing out on track and getting the laps in over the winter.”

Tom Ingram said: “We were more than happy with that in those conditions, it can go one of two ways. I’d have loved pole but I’m more than happy with second. We can do something from here. Gordon (Shedden) is third, Jeff (Smith) will be pushing for the win so we’ll have to try and get him off the line and try and get clear but we’ll see. I’ve had a cold this week, so I’m not feeling 100 per cent, but I’ll be fine for the morning!”

Gordon Shedden said: “That was a bit of a random one! It was never totally dry. I think a few tried to get on it a little too quickly for the tyre. I had a little moment, well a huge moment, but I don’t think I was the only one! I’ll put that down to an experience and get on with it. It’s the same for everybody but it’s a shame with these conditions. That said, you want to be somewhere rather than nowhere so it’s OK, I’m happy.”

Matt Neal said: “The car’s perfect but the the track was changing corner-by-corner, lap-by-lap. With all three of our cars in the top ten, we’re really chuffed and with Jeff (Smith) on pole it’s three Hondas in the top four – pretty special.”

Colin Turkington said: “We were just hampered by the weather at the start of the session when it was spotting with rain, but then it cleared and we got a go at it. Really quickly the weather turned on us after that. I think everybody feels frustrated at not being able to get a clear run and see what the cars are capable of, but the end result is good for me. I’ve been running in and around there all day so it’s probably representative. We’ve been nudging the car in the right direction. In FP1 we had a bit of a balance issue but we’re improving it.”