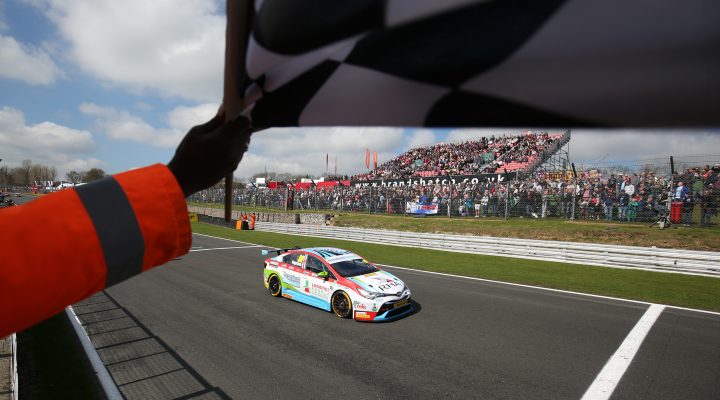 Speedworks Motorsport’s Tom Ingram has won the opening race of the 2017 Dunlop MSA British Touring Car Championship, after getting the better of pole-sitter Jeff Smith at Brands Hatch.

Ingram secured his move before the cars had roared into Paddock Hill Bend for the first time, gliding his Toyota Avensis around the outside of Smith’s Eurotech Honda, whilst contact behind forced two of the championship’s big guns into retirement.

Matt Neal tried to defend against the charging rear-wheel drive BMW of Colin Turkington off the line, but unfortunate contact was made as the Honda moved across track. Both cars stuttered into retirement with damage due to the incident, whilst the Safety Car was called to retrieve the stricken machines of the two former champions.

BMW Pirtek Racing’s Andrew Jordan had already stormed from 11th on the grid up to sixth, but there would be more action as soon as the race resumed. Smith was forced immediately in full defensive mode but he couldn’t keep Gordon Shedden’s Honda behind, as the reigning champion made a superb move into Graham Hill Bend on lap six, whilst Adam Morgan eyed his opportunity to follow suit.

This left a top three of Ingram, Shedden and Morgan with a gaggle of cars now backed up behind Smith’s Honda Civic Type R.

Rob Austin and Jack Goff eventually made their moves into fourth and fifth respectively on lap 15, shortly before Smith was cruelly forced into retirement with a mechanical issue.

Michael Epps and Rob Collard were having a ding-dong battle in the latter half of the top ten, with the young VW driver initially getting the better of his more experienced rival. The BMW 125i M Sport of Collard kept pace throughout, however, as did his stablemate Jordan – impressing on his rear-wheel drive debut.

Collard sneaked by Epps on lap 23 and repeated the trick on Mat Jackson’s Team Shredded Wheat Racing with Duo machine. The Team BMW racer would eventually finish seventh, immediately behind 2013 champion Jordan. Jackson, Epps and series returnee Tom Chilton completed the top ten, with the latter hustling the new Vauxhall Astra throughout the 27-lap contest. A solid finish for new boy Senna Proctor in the sister car ensured Vauxhall sit atop the Manufacturers’ standings after the opening round.

Matt Simpson scored his best ever BTCC result with 11th, as he fended off the Subaru Levorg of double champion Jason Plato.

Back at the front and it was Ingram cruising to a commanding win as Shedden valiantly defended the attack from the Mac Tools-backed Mercedes of Morgan, the pair eventually crossing the line separated by just 0.167s.

All credit goes to race-winner Ingram, however, with the 23-year-old repeating his 2016 result by winning the opening race of the season.

“That was absolutely fantastic, how do you put it into words?,” beamed Ingram. “Two years on the bounce – it’s the best way to repay all that hard work over the winter. The start we had was our plan all along. We had to try and get the jump on Jeff (Smith) off the line and it was just about as perfect as it could have been. From there, I just tried to build as big a gap as I could. It’s a heck of a result but now we’ve just got to ensure we don’t do what we did last year. We were pace-setters but we lost a lot of points over the races. If we can make amends there, we will be in contention.”
2017 Dunlop MSA British Touring Car Championship – Round 1 – Brands Hatch (Indy):