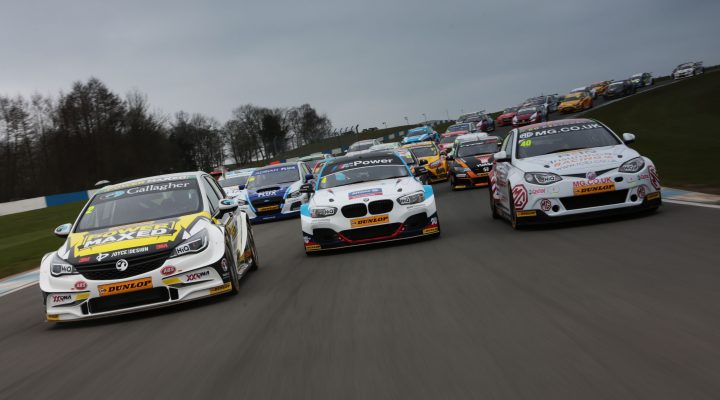 Competition in the Dunlop MSA British Touring Car Championship is as fierce as ever as the teams and drivers head to Leicestershire’s Donington Park next weekend (15-16 April) following an all-action season-opener.

A full 32-car grid lined up at the Brands Hatch curtain-raiser, with 28 of those incredibly separated by less than 0.9 seconds during practice. From the outset, it was truly anybody’s game with an unprecedented depth of quality in the field. Discounting the rookie entrants that could not yet have tallied a BTCC win, some 60 per cent of the championship’s drivers had previously taken to the top step of the podium, while only two of the teams in the paddock had yet to make the rostrum. This was borne out in the on-track action in Kent last week with three different winners, representing three different marques.

With the evolution of new chassis components for 2017 now in place across the board, a new TOCA power unit, updated tyre specifications and compounds from Dunlop and teams still learning their 2017 machinery, the form book has been thrown out of the window – ensuring fans are once again in for a feast of close-run, unpredictable racing.

All of the action will be broadcast live and free-to-air by the championship’s long-standing partner ITV on ITV4, ITV Hub and streamed online at itv.com/btcc. This means that whether you’re in the grandstands, on the spectator banks or relaxing in your front room, you won’t miss a second of the drama – and, if anything is guaranteed in the BTCC, it is drama.

Decorated manufacturers enjoy successful return
BMW and Vauxhall made their mark on the Brands Hatch weekend, with both taking to the podium on their return to the series. Andrew Jordan completed a dream debut for BMW Pirtek Racing by claiming victory in the closing race of the weekend. The Midlander switched from front-wheel drive Ford machinery to the rear-driven 125i M Sport over the winter and looked at home right away – holding off a late attack from West Surrey Racing stablemate Colin Turkington, as the Bavarian marque notched a one-two finish to lead the overall Manufacturers’ standings.

Tom Chilton’s own comeback after a six-year absence featured a taste of champagne on the rostrum for Vauxhall. Chilton’s team-mate, Senna Proctor, was the best of the fresh faces on his way to the opening weekend’s Jack Sears Trophy for highest-placed rookie and the pair’s combined efforts were enough to yield Manufacturers’ honours in race one for the Luton firm.

Reigning champion Gordon Shedden made his presence felt with a race two victory with a ballast-laden Honda Civic Type R, backed up by a race one runners-up berth – a signal to all that it will likely take something special to dethrone him. He’s currently the man to chase atop the Drivers’ championship and Halfords Yuasa Racing are leading the Teams’ table.

“The championship lead obviously comes with its own challenge in the form of a 75kg handicap going into qualifying,” said Shedden. “It is clear that the advantage is going to ebb-and-flow throughout the season – and as I’ve always said, I’ll take points in the bag every day of the week and then deal with the rest of it later.

“The goal is to leave still leading the championship – although quite how I do that, I haven’t figured out yet!”

Tom Ingram follows just behind the Scot in the running at this very early stage, starting as he did last season – with a win to open his account. A race two podium bolstered his credentials and he will be encouraged by his pace in the official pre-season test at Donington Park, where he topped the timesheets.

Ciceley Motorsport’s Adam Morgan made an excellent start to his campaign with a trio of top five finishes and an Independents’ win at Brands Hatch. The Mac Tools-sponsored Mercedes-Benz A-Class showed its promise early on and Morgan made good on that potential, ensuring he and his outfit topped the Independents’ charts after a string of strong results.

Twenty up
The most successful driver in the BTCC in terms of race wins is Adrian Flux Subaru Racing’s Jason Plato. He made his debut in the championship at Donington Park some 20 years ago, and since then, the legendary racer has tallied an unprecedented 95 victories – 35 more than the next driver on what is an esteemed roster of touring car greats, Andy Rouse.

Another experienced head, in Matt Neal, will travel to Donington chasing Rouse’s total, with the Halfords Yuasa Racing man just one victory shy as it stands. Neal will arrive in Leicestershire the more optimistic of the pair after a strong weekend for the works Hondas last time out. He also scored a victory in the final race at the corresponding event last year. Plato, on the other hand, endured a tough start to 2017 with race two contact putting paid to his hopes at Brands.

Home advantage
Neal, from Stourbridge, counts Donington Park as his home circuit and it’s a venue that holds very happy memories for him. In 1999, his maiden BTCC victory also made him the first Independent driver in the modern era to win a BTCC race outright – receiving a £250,000 cheque from Series Director Alan Gow. In his 27th campaign in the series, the 50-year-old remains on top of his game and he will undoubtedly be one to watch in Leicestershire.

“It’s always great to race at my local track and I have a lot of special memories there, going right back to my very first BTCC win in 1999,” said Neal. “They’ve resurfaced some of the circuit this year and it will be the first time we will have run on the harder-compound Dunlop tyres in 2017, so that will be a new challenge.”

Fellow champion Andrew Jordan (Lichfield) will similarly view the venue as his backyard, and he comes into the weekend off the back of a storming win last time out – besting rear-wheel drive specialist and WSR team-mate Colin Turkington on his first weekend giving rear-driven machinery the full beans.

Longbridge-based marque MG will also consider Donington as home soil. New pairing Aron Taylor-Smith and Dan Lloyd had a mixed weekend at Brands Hatch and will be looking for better next time out.

Eurotech Racing is a Midlands-based outfit, fielding a pair of potent Honda Civic Type Rs with Coventry’s Jeff Smith and Jack Goff at the helm. The former scored a standout pole position – his first in the BTCC – at the season-opener and the duo will hope to build on the pace they showed in Kent.

Team Parker with Maximum Motorsport also hails from the area, as does its two-time race-winning driver Stephen Jelley.

Timetable and tickets
The second race day of the 2017 Dunlop MSA British Touring Car Championship takes place on Sunday 16 April, with all three BTCC encounters – and many of the day’s other races – broadcast live and in high-definition on ITV4. Those in attendance at the circuit can stay in touch with the commentary and live timing from every session, available at btcc.net/live throughout the weekend.

In addition to the BTCC, the support series on the TOCA package are set to bring even more action to Donington Park. Sportscar racing fans will get their fix with races from the Porsche Carrera Cup GB, Michelin Ginetta GT4 SuperCup and Simpson Race Products Ginetta Junior Championship. The Renault UK Clio Cup – often seen as a stepping-stone to reaching the BTCC – will also feature on the huge bill of British racing, as will the F4 British Championship, the single-seater launchpad for the next generation of aspiring Formula One world champions.

Tickets for the Dunlop MSA British Touring Car Championship’s annual visit to Donington Park on 15/16 April are available in advance from just £12, with free entry for children aged 13 and under. For more information, visit www.donington-park.co.uk. All admission includes access to Sunday morning’s Pit Lane Walkabout and autograph session with the BTCC’s stars (limited spaces) and the racing paddocks, as well as free parking and giant TV screens on Sunday. Racing starts at 09:25 on Sunday with the final BTCC showdown scheduled for 17:22.