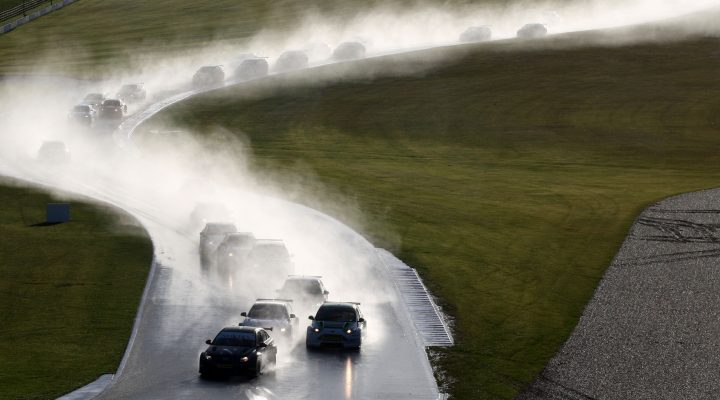 Shedden looked to have produced a classy drive amidst difficult conditions, as the reigning champion made relatively light work of four cars ahead of him despite losing a place to the Ford Focus of Josh Cook at the start. The Scotsman re-passed Cook on lap three and had lunged his Honda down the inside of Colin Turkington’s BMW before the end of the same lap.

Pole-sitter Dave Newsham had initially scampered away whilst those behind squabbled for position, but Shedden soon reeled in the BTC Norlin Chevrolet Cruze and blitzed around the outside at Redgate to take the lead. He romped home to take the chequered flag but it soon became clear that his Civic Type R had failed its post-race ride height checks, resulting in his exclusion from the final result.

It meant that the move for the win took place on lap eight as Turkington carved his way past Newsham at the final chicane.

“That was incredibly tricky,” said Turkington. “We were just on the limit of grip everywhere. The Craner Curves were just the biggest challenge. I enjoyed it, and I was just trying to focus on Gordon and keep the lap times consistent. I’m so happy for the Team BMW guys. They grafted hard through the night. We’d done nothing spectacular up until now this weekend – we’ve just collected a really good points haul and that’s what you’ve got to do!

Newsham fought valiantly for the remainder of the race as he tried fending off a gaggle of cars. A pulsating battle saw Ashley Sutton’s Subaru nip by the Chevrolet, only for Newsham to claw his way back past on the penultimate tour. The duo were joined by Adam Morgan’s Mercedes on the final lap, and it was three abreast on the down to Roberts. It was Morgan who emerged ahead of Sutton to take second place, as Newsham narrowly missed out on a podium for the new BTC Norlin squad.

Tom Ingram took fifth and with it the overall championship lead, whilst he and the Speedworks squad also top both Independents’ tables.

Jack Goff came out on top of a good battle for sixth with Josh Cook, whilst race one winner Aiden Moffat brought his Laser Tools Racing Mercedes home in eighth. MG’s Aron Taylor-Smith and Power Maxed Racing’s Senna Proctor rounded out the top ten, with the latter also scooping the Jack Sears Trophy.