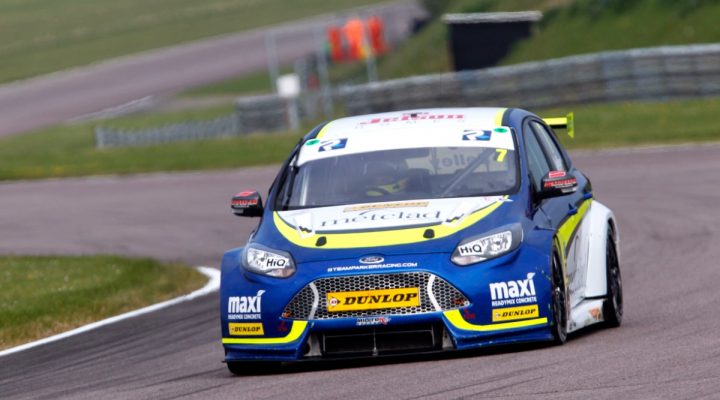 Team Parker with Maximum Motorsport’s Stephen Jelley heads to Thruxton looking to push on from a solid start and into ‘more representative’ territory for what both team and driver feel is capable machinery.

The BTCC returnee has completed each of the six rounds so far and believes now is the time to place his Ford Focus in and around the points-paying positions.

“I’ve finished all of the races so far this season,” said Jelley. “We’ve been fired off a couple of times and we had a puncture at Brands as well as some issues with the car where we’ve just about managed to drag it home.

“If I’m honest, I am a bit disappointed in our qualifying positions so far and in our performance and I’m sure we can do better.

“We showed a bit more of an indicative pace at Season Launch, around the edge of the points-paying spots and I think we should be shooting for anything around there.

“With the car the way it currently is, it’d be very hard to qualify in the top 10 but we should be well inside the top 20.

“Our Donington qualifying performance was abysmal. We went the wrong way on setup and now we’ve changed tack.

“We’ve made a conscious decision now to shadow both cars a little bit. We were very different which does make sense because you want to try things and bounce things off each other but we were so far apart that we couldn’t compare and contrast.”

“Racing front-wheel drive is different to a rear-wheel drive car. You’ve got to make sure you get that front end into the corner because if the guy behind gets his nose up the inside he’ll drive straight by.

“There are always little tiny things to get your head around.”

Jelley’s visit to Thruxton in testing was his first around the Hampshire circuit in front-wheel drive machinery. Both Team Parker with Maximum Motorsport men along with a host of other drivers up and down the pit-lane have spoken about the value of lapping prior to racing here, given just how unique a prospect the track offers up.

“The cars have the new tyre and the engine is slightly different to before. It’s important for me and Josh (Cook) to work together to get a baseline setup then one car can try something and the other can try something different to see what comes out on top at each race meeting. Testing gave us that chance to nail things down before we arrived here on the race weekend.”

On the challenge of the ‘old school’ circuit Jelley sees things as a high speed balancing act.

“The car bounces so you get the occasional hop and the rear moves around so you’ve got a lot of steering input. The balance of the car and the major moments happen quite slowly.

“It moves around but then the rear might come around quite slowly but you’re still very aware of the speed you’re travelling it. It’s like balancing on a tightrope.

“You’re trying to get on the gas out the back as quickly as possible but if you drop a wheel off the track at 100-plus miles an hour, then it’s going to get your attention!”