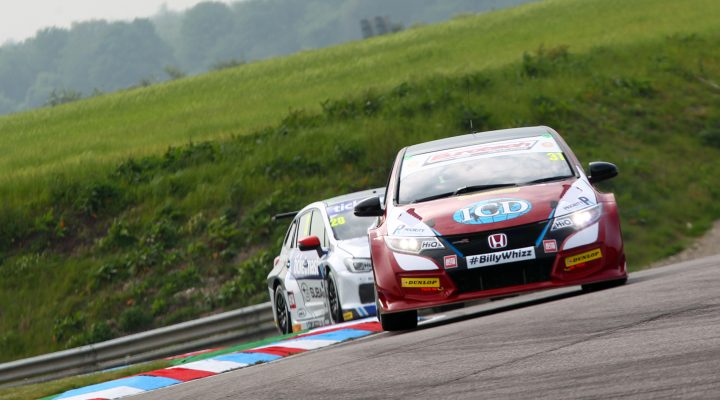 Early Thruxton pace-setter Jack Goff has silverware in his sights in the Dunlop MSA British Touring Car Championship this weekend (6/7 May) around a track that has traditionally been a happy hunting ground for the Honda Civic Type R.

Goff has enjoyed a solid if somewhat under-the-radar start to the 2017 campaign after switching fromWest Surrey Racing’s rear-wheel drive BMW 125i M Sport to Eurotech’s front-wheel drive Civic, qualifying well and finishing inside the points in every race but thus far lacking the ultimate pace to challenge for the podium.

The 26-year-old was firmly on the pace in the Thruxton pre-event test, however – a day topped by his team-mate Jeff Smith – and Goff posted the benchmark lap time during FP1 today as he bids to concretise his potential with a return to the rostrum for the first time since Knockhill last summer.

“I look at our season so far in two different ways,” he reflected. “We’ve had two mediocre weekends where it hasn’t quite gone to plan, but we’re still sixth in the overall championship and third in the Independents’ so I think if we can put together a complete weekend rather than just one or two good races, we should be somewhere near where we need to be.

“Going back to front-wheel drive in the Honda Civic Type R has been great for me; the first time I jumped in it, I could tell how good it was. It probably isn’t the fastest car over a single lap in qualifying just due to its shape and drag, but certainly in the race it comes alive and that’s so important in touring cars. It doesn’t really have a weak track either.

“They’re a great bunch at Eurotech and I like to think I’ve brought a little bit to the team as well. We’ve admittedly put ourselves under some pressure this weekend after going so well in testing, but the Civic has proven to be quick at Thruxton in recent years so history is on its side and I want to go out there and bring the Eurotech boys and girls back some trophies.”