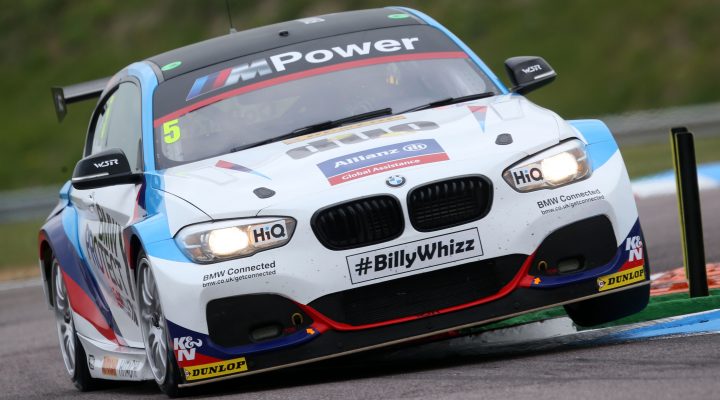 The local driver had already surged from tenth on the grid up to sixth by the time the race had been red flagged for the first time, following a high speed accident involving Senna Proctor’s Vauxhall and the two MGs of Aron Taylor-Smith and Daniel Lloyd.

Contact between Proctor and Taylor-Smith collected the unfortunate Lloyd, whose MG6 was fired off into the barrier at Church corner. Whilst the three drivers exited their vehicles unscathed, the same couldn’t be said of the Armco barrier which required significant repair.

Collard blasted off the line again at the restart with his rear-wheel drive BMW 125i M Sport immediately up to third and harassing the two factory Hondas ahead of him.

It was three-wide for second into the final chicane on lap two as Collard emerged ahead of Eurotech’s Jack Goff and Halfords Yuasa Racing’s Gordon Shedden.

The drama continued as the Honda Civic Type R of race leader Matt Neal was then seen slowly crawling down the pitlane with a steering problem, handing Collard an unlikely advantage. Reigning champion Shedden soon disposed of Goff for second and a two-way tussle for the win commenced.

With the race seemingly building towards an exciting climax it was unfortunately cut short following an accident involving the Team Shredded Wheat Racing with Duo Ford of Martin Depper. The Focus ran off at Goodwood and speared across the track into the tyre wall, leaving debris in its wake.

So, as the red flags waved it was Collard claiming his first ever Thruxton win from Shedden, whilst Tom Ingram completed the podium following his own eye-catching pass on Goff.

“That was an explosive few laps!” beamed Collard. “The BMW felt absolutely stunning and I’m so pleased for the team. We did a lot at the first start, and then the re-start was similarly textbook. I had a really good opening lap and then I’m not sure what happened to Matt – I could see sparks coming off – so it was obviously a shame for him but I will take this one and with pride.

“I must admit, going three-abreast into the chicane was pretty scary! I had one of the Hondas on my left and then cheeky Jack Goff snuck up my inside on the right – I didn’t see that one coming! The BMW has been on fire today and it’s brilliant to take my first win of 2017. A big shout out to Billy [Monger], who is watching at home on TV – Forza!”

Handy Motorsport’s Rob Austin made a great move on Team BMW’s Colin Turkington to take fifth, whilst the two Mercedes’ of Adam Morgan and Aiden Morgan sandwiched Ash Sutton’s Subaru in the latter half of the top ten. It was Eurotech’s Jeff Smith who claimed tenth, ahead of the next Honda in the pack – Matt Simpson.