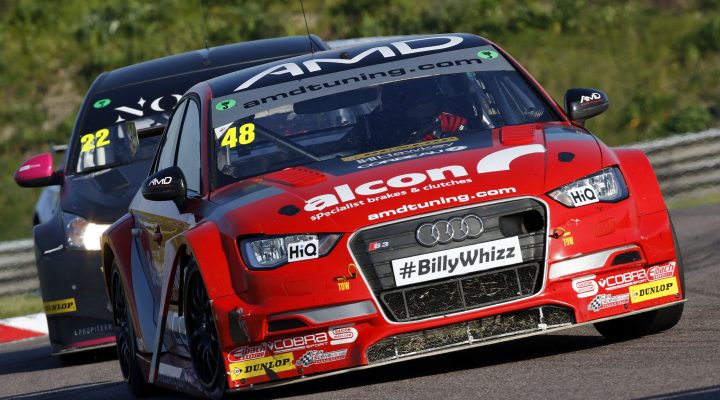 AmDTuning.com with Cobra Exhausts’ run of points finishes came to an end at Thruxton, though there was still cause for encouragement leaving Hampshire after what has been a positive opening third of the 2017 Dunlop MSA British Touring Car Championship season for the West Thurrock outfit.

The team went into the third meeting of the year looking to add to its points tally after drivers Ollie Jackson and Ant Whorton-Eales both brought home top 15 finishes last time out at Donington Park. With Jackson having also scored points at Brands Hatch, the team was keen to maintain its upward curve on its return to the venue where it opened its account with the Audi S3 Saloon 12 months earlier.

The highly competitive nature of the field this season was once again reflected in qualifying. Jackson’s time was just over a second off the benchmark but despite this, he would find himself down in 25th place on the grid for race one. A strong and consistent run through the field from lights out saw him up to 18th by the finish.

From there, climbed up to 15th and a points-paying position in the early stages of race two before an accident at Church forced officials to bring out the red flags. A further incident saw the red flags fly again after six laps, with Jackson ending up just shy of the points in 16th spot.

It would be a similar story in race three, with the AmD man battling on the cusp of the fiercely-contested points spots on the way to 17th – his battled-scarred Audi showing afterwards how frenetic battle had been on track.

“It’s disappointing that we didn’t manage to score any points this weekend, but it was unbelievably tight on track,” he said. “Thruxton is a bit of a bogey circuit for me, but we were right in amongst it and with a bit more luck, we could easily have come away from the weekend with a decent result to our name and been celebrating more points on the board.

“We can’t dwell on what might have been however, so it’s time to put Thruxton behind us and focus on what is to come through the remainder of the season.”

Team-mate Whorton-Eales broke into the top 20 in qualifying, setting the second fastest time of all through the final sector of the lap en-route to 19th on the grid.

The Lichfield racer was unable to build further in the opening race, however, as he was forced wide and onto the grass at Noble early on, which resulted in an enforced pit-stop to allow the team to remove debris from the front of the car – ultimately ending up a lap down in 30th place.

He gained six spots on the way to 24th in race two, despite battling an electrical problem throughout.

Unfortunately for the reigning Clio Cup UK champion, time was against the team and he was forced to take a watching brief during final race of the weekend, with that issue precluding the car from entry.

“It’s been an up and down weekend and obviously it was disappointing to have picked up the electrical problem that forced us to miss race three,” he said. “We thought we’d managed to find the issue after race two but sadly it wasn’t the case and it prevented us from trying to push forwards towards the top 20.

“It’s a shame that we couldn’t show what we were capable of in terms of the end results, as the pace in the car was clear to see from qualifying and then in the way I was able to run with the leaders without a problem in race one – particularly when you consider it was my first time here in a BTCC car.

“These things happen though, and we’ll come out fighting to score more points next time out.”

Team boss Shaun Hollamby admitted it was unfortunate for the team not to add to its points tally, but insisted there were still positives to take away from the weekend.

“We hoped to maintain our run of points this weekend but sadly it wasn’t to be,” he said. “Ant’s performance in qualifying was encouraging and put him in a good position for race day, and it was unfortunate that we couldn’t build on that in race one.

“Had he not been forced off track then we could easily have scored in that race, and it’s a shame that the electrical gremlins then affected his car in race two and prevented him starting race three. I have to thank the team, and also the guys from Swindon Engines, for their efforts ahead of race three, but time was just against us.

“The fact that Ollie came so close to points in all three races showed we had a strong race car, but it’s the field is so close this season that it isn’t easy to fight through the pack. A few tenths of a second in qualifying would have put him right up with Ant on the grid and I’m sure he’d have been able to then add to his tally.

“Having seen the pace of the car again in race trim, it’s clear to see what we need to work on our one lap pace so that both drivers can try and qualify higher up the grid when we get to Oulton Park and challenge for more points.”