IHG® Podium Predictor: O’Neill’s the pundit to beat at Oulton 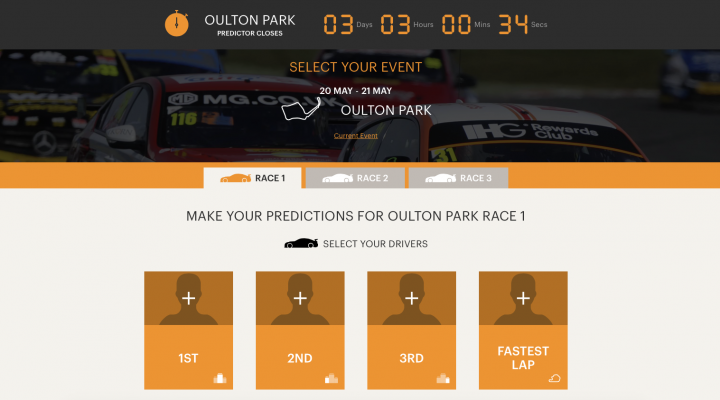 The IHG® Podium Predictor returns this week as the BTCC heads north to Oulton Park, and the man to beat this weekend is fast-talking ITV Sport presenter Paul O’Neill.

BTCC Podium Predictor is new for 2017 and gives fans the chance to score bragging rights and a bundle of top-drawer prizes courtesy of longstanding championship partners IHG® Rewards Club.

Jamie Smith was the expert forecaster over the Thruxton weekend as he beat the pundit, in legendary ex-racer John Cleland, to score 40 points and take home four weekend passes to a circuit of his choosing and enough IHG® Rewards Club points for a long weekend away with the family in celebration, as well as a stunning piece of wall-art from Graham and Leigh to hang up in pride of place at home.

To outdo Paul O’Neill this coming weekend, all you need to do is register or login at www.podiumpredictor.com and predict the podium positions and fastest lap for each of the three contests in Cheshire.

It’s no mean feat but you don’t need to hit the nail on the head, you just need to beat Paul to be in with a chance of winning. See his analysis above.

He’s gone for a race one victory for Halfords Yuasa Racing’s Matt Neal as well as the weekend’s fastest lap. Then, he’s picked out BMW Pirtek Racing’s Andrew Jordan for a race two triumph and a win in the finale for Team BMW’s Colin Turkington.

You can enter your predictions NOW but you’re free to change them right up until 3pm on Saturday, meaning you can study the timesheets following both practice sessions!

See www.podiumpredictor.com for full terms and conditions, Paul’s predictions and details on the prizes.