Jordan holds off Neal in thriller 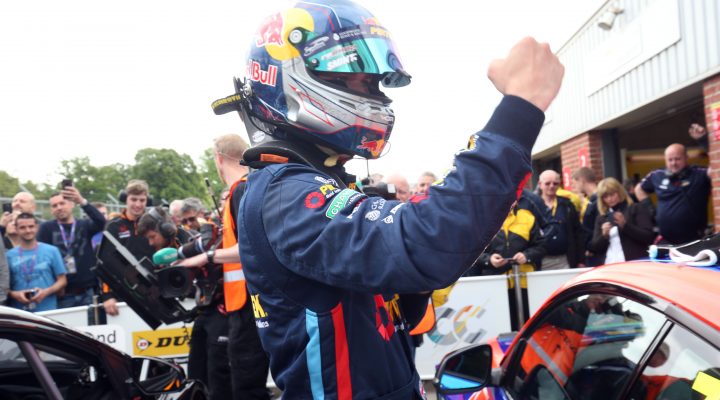 Jordan blasted by pole-sitter Neal off the line as the rear-wheel drive 125i M Sport got its customary catapult start on the run down to Old Hall Corner for the first time. Critically for Neal, however, is that he was able to keep the sister BMW of Colin Turkington in his rear mirrors and set about focussing on recapturing the lead.

The top two pulled comfortably away from a sensational battle for third that often involved more than half a dozen cars. Turkington had nipped past Aiden Moffat’s Mercedes on the opening tour, whilst Ash Sutton’s Subaru made a standout move on Mat Jackson behind them.

Two championship challengers endured miserable opening laps, as both Adam Morgan and Tom Ingram went off in separate incidents – both would fail to score points for the first time this season.

Meanwhile, Moffat was back by Turkington as Sutton drew ever closer in the Adrian Flux-backed Subaru. A sensational moment on lap seven saw Sutton slide by Team BMW’s Turkington into Hislops, as the latter was himself trying to pass Moffat’s Mercedes ahead of him.

Jackson joined the fray, along with Rob Collard and Gordon Shedden, who had himself been shuffled down the order by a similar move to Sutton’s at Hislops.

The battle for the final podium position was building towards a tense climax as Moffat squeezed Sutton onto the grass on the exit of Island Bend, allowing Turkington back by. A fired up Sutton would not be denied, however, as he first went around the outside of Turkington at Lodge Corner and then repeated the trick on Moffat at Old Hall seconds later. Turkington was completely out of contention shortly after, as he struggled to the finish with a mechanical problem.

Neal was busy reeling in Jordan’s BMW up front, which was running the softer Dunlop SportMaxx tyre. The triple champion ran out of time, however, as the pair crossed the finish line separated by just 0.284s – confirming Jordan’s second win of the season.

“What a week it’s been!” said a delighted Jordan. “I’ve had a little girl and now I’ve won again for BMW in the BTCC – life is good. It’s been a cracking effort from everybody at BMW Pirtek Racing. Ahead of this weekend, I was thinking ‘I really need to get my arse into gear now and do this’. I’ve made cracking starts this year, which added some pressure – people were telling me I should be leading by Turn One!

“Thankfully, that’s exactly what happened and being on the soft tyres, I pushed hard to establish an early gap. Later on, they told me on the radio ‘Matt’s coming’, so I dug deep and was able to maintain the advantage – although if it had been a couple of laps longer, he might have got close enough to attempt a Matt Neal lunge! We’ve had a couple of dreadful weekends, but you don’t forget how to win and that’s a good message to send out.”

“Close but no cigar!” responded Neal. “We got jumped off the line by Andrew [Jordan] as expected but I was really chuffed that I managed to stay ahead of Colin [Turkington]. I pushed to try to get him to eat into his soft tyres early on until I began to feel my own tyres going away a little bit so I had to calm down and throttle back slightly, which gave him a breather for a while.

“Later on, I got a second wind and after that I was waiting either for his soft tyres to fade or a mistake, neither of which came. We’ll have more weight in the car for race two, but the Honda Civic Type R feels great – and that’s a real positive moving forward.”

Sutton ended up on the rostrum ahead of Moffat, Collard and Jackson respectively. The ballast-laden Honda Civic Type R of Shedden held on to seventh despite late race contact with Josh Cook’s Ford. Rob Austin and Jake Hill completed the top ten, having had their own enjoyably scrap in the closing laps.

“After getting past Gordon [Shedden] on the exit of the hairpin on the opening lap, I set my sights on Colin [Turkington] ahead and managed to pull off a move on him too,” enthused Subaru star Sutton. “Aiden [Moffat] was then a bit more of a challenge – he put up a good fight. He ran me wide onto the grass heading down towards the chicane, although in fairness to him, I think he was unsighted. I had to reset after that and to make two more places up around the outside of the final corner was mega!”

The non-scores for Ingram, Morgan and Eurotech’s Jack Goff means that Collard is now the only driver to have claimed championship points in each of the ten races so far this season.