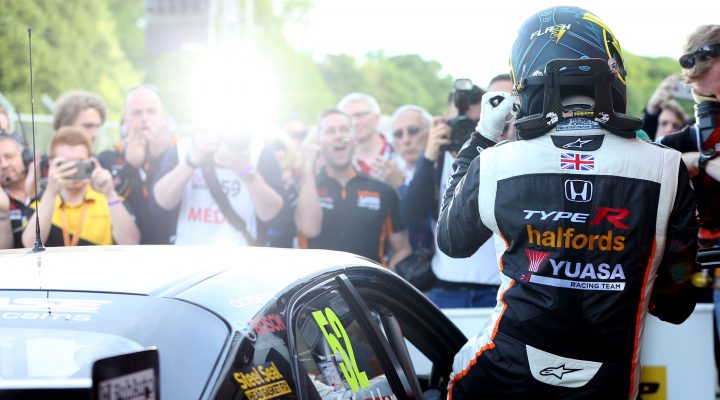 The win wasn’t without incident however, as contact between Shedden and the pole-sitting Ford Focus of Josh Cook left the former with broken suspension and out of the race.

BMW Pirtek Racing’s Andrew Jordan had already assumed the lead by that point, but Shedden’s move for victory was an act of class as he scythed his way past at Cascades following a mid-race safety car period.

Neal immediately followed suit and the Honda duo went on to take the laurels ahead of Jordan’s BMW 125i M Sport.

“That’s an important win for us and a lovely end to the day,” said Shedden. “It was a pretty chaotic race out there. I had an off yesterday and the team did a magnificent job to repair the car. We get the plaudits but the boys deserve all the credit for this one.”

Ashley Sutton produced an heroic defensive effort to claim fourth as he fended off the charging Team BMW pair of Colin Turkington and Rob Collard. Turkington had been fighting back through the order all day after electrical gremlins ended his race one challenge. He claimed 13th from the back of the grid in race two, before making a number of stellar moves in the final showdown to take a hard earned fifth place finish.

Handy Motorsport’s Rob Austin secured another consistent result with seventh, ahead of the VWs of Michael Epps and Jake Hill. Luke Davenport put in a hugely impressive performance to claim his first ever top ten finish for Team Shredded Wheat Racing with Duo, also netting him a maiden Jack Sears Trophy triumph.

A number of cars were in the wars, including Aiden Moffat’s Mercedes, whose accident following contact with Dave Newsham’s Chevrolet brought about the aforementioned spell behind the safety car.