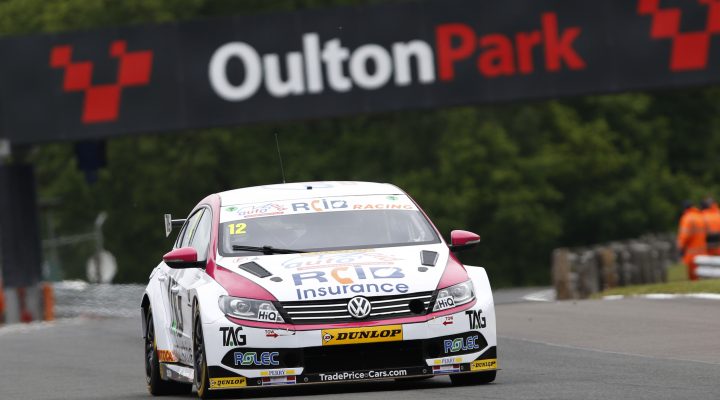 Mike Epps made it back into the top ten with a hard-fought eighth at Oulton Park, his highest-placed finish. Jake Hill’s trio of top-tens meant he tallied his all-round most successful weekend yet in the championship, while rookie Will Burns netted a trio of solid finishes, progressing to 22nd come race three.

Epps, whose eighth was the pinnacle of Team HARD’s efforts this weekend, put himself right back in the mix at the front of the field with a points finish hat-trick.

After an engineering overhaul of the car ahead of the meeting, the focus in Saturday’s two free practice sessions was on fine-tuning the set-up of the Volkswagen CC ahead of qualifying, though changing weather conditions limited their opportunity to do so.

Epps was on the pace in qualifying in his Autoaid/RCIB Insurance Racing CC, though he ended the session rueing what might have been after a lap that was on course to place him in the top six was halted by red flags. Instead, the Hemel Hempstead racer took thirteenth on the grid for the first of Sunday’s three races.

After maintaining thirteenth for a large portion of the opening race, some late progress earned him an 11th placed finish and put the top ten firmly in his sights for race two.

Once again, Epps held station during the typically frenetic opening few laps of the race, before moving into tenth place on lap four and slotting in behind team-mate Jake Hill.

As the race settled down, Epps held double BTCC champion Jason Plato at bay to take the chequered flag in tenth, and those two would renew rivalries during an action-packed final race of the day.

Keeping himself out of trouble while a number of cars around him came to blows, Epps made the jump to eighth position before the safety car emerged on lap eight – an interlude that worked in his favour in maintaining crucially his softer Dunlop option tyres.

Epps took the restart with the opportunity to fight for a maiden Independents victory with Rob Austin ahead, however a spirited challenge would be rebuffed, leaving him to take his sixth career BTCC top ten finish with eighth  – enough to ensure he has now comfortably eclipsed his final points tally from the 2016 season.

“We have certainly moved back in the right direction this weekend,” said Epps. “Every time we’ve gone out on track we’ve improved, we’ve been in the top ten on merit, and that’s a really good sign going forward this season.

“I think Thruxton was a bit of an anomaly for us, the Volkswagen was just not as balanced there due to a lack of testing and hard tyre knowledge, but Oulton Park is a more traditional circuit and we were able to start to show our potential again.

“I really enjoyed being back in the mix towards the front, with some good racing across all three races, even if I seemed to spend all day trying to fend off Plato in his rear-wheel drive car which was a hassle. Hopefully we can push on from here at Croft next time out.”

Over in the TAG Racing side of the garage at Team HARD, Jake Hill managed to string together his best weekend yet in the BTCC, with the outfit hooking up their Volkswagens around the Cheshire circuit.

Hill qualified an encouraging 10th and followed up on that promise by holding station during the opening bout on Sunday. From there, Hill tallied a ninth-place double to make certain of a bountiful weekend of championship points, leaving him just seven points shy of Epps in the overall Drivers’ standings and springing him into the top-ten in the Independents’ running.

Will Burns enjoyed an encouraging weekend, too, battling through all three rounds to 22nd spot – three more finishes as his rookie season progresses.