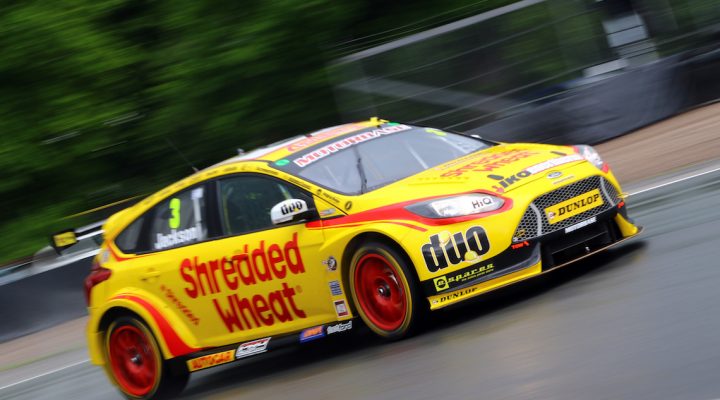 A trio of top tens for the Motorbase-run outfit at Oulton Park three weeks ago saw Mat Jackson claim season-best results of sixth and seventh in the weekend’s opening races before an engine issue cruelly ended the Warwickshire man’s chances of challenging the podium in the finale.

With a pre-Croft test session under his belt, Jackson – who turns 36 on Saturday – is confident that the Focus has turned a corner and has his eyes firmly set on a return to the rostrum.

“We’ve put a lot of work in since Oulton Park and have definitely taken a step forward with the car,” added Jackson. “We had a really productive test last week, worked through a number of changes on the Focus and I feel that we’re in a good place going into this weekend.

“Obviously the real test will be how we compare against the others at Croft, which favours the rear wheel drive, but the plan is to get back onto the podium this weekend; that’s what we need.”

BTCC rookie Luke Davenport looks to continue his upward curve after breaking into the top ten and claiming his maiden podium and Jack Sears Trophy triumph at Oulton Park. The 24-year-old is keen to build on his performance and move up the standings before the BTCC heads into its traditional summer break.

“We haven’t had a weekend yet where we’ve been consistently happy with the results on both days so that’s what we’re looking for at Croft,” said Davenport. “We’ve got the capability, the car is improving all the time and we’re gaining more experience each weekend.

“It’s just about tying it all together now – qualifying well on Saturday and then consistently staying in and around that top ten. That would be brilliant.”

Team-mate Martin Depper is hoping for a change of fortunes at the North Yorkshire circuit after enduring a tough start to his 2017 campaign, with the Midlands-based driver looking for a consistent, incident free weekend as he settles in to his first season in the Ford.

“I’m looking forward to Croft,” said Depper. “We feel we’ve made a good step forward recently and I’m hoping this translates to a good lap time. Croft is a great circuit which has a bit of everything. It’s quite challenging and with high tyre wear you need to have a car which can be both fast and look after its tyres. Qualifying will be key, as it has been all season, and it’s an area we’ve been looking at.”

“We’re all looking forward to Croft this weekend,” added Team Manager Oly Collins. “We saw an improved performance for the Focus last time out at Oulton Park. Qualifying in particular was a step forward which is proving more important than ever this year, so being able to get that one fast lap out of the tyres is key to us having a successful weekend.

“We’ve been out testing since Oulton Park and we’re confident that we’ve made further improvements to the cars;” added Collins. “Hopefully those improvements will translate into results on the track this weekend.”