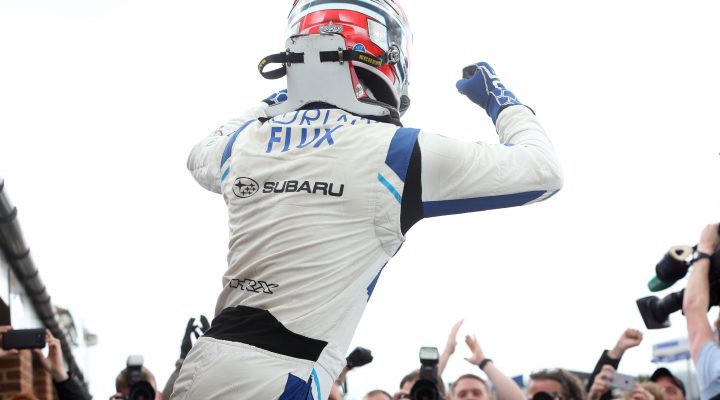 Sutton and Turkington held the top two positions throughout the contest and were rarely separated by more than a few tenths. Team BMW’s Turkington tried several times to nip by but young Subaru star Sutton defended valiantly to claim his second win of the season.

“I’ll be honest, I didn’t expect a win from that,” enthused Sutton. “My focus was to get away cleanly and we did. It was my best start to date – we needed it and it paid off. We hadn’t the grip level that Colin (Turkington) had on the softer tyre but we were strong in the key areas to maintain the gap for the whole race.

“We’re having a fantastic weekend so far. We’ve bounced back from having a car that didn’t look in the best shape after qualifying yesterday to this – full credit to the team. Croft’s been phenomenal for me the past few years. We’ll keep on at it.”“The pace in the BMW was good for that race but just not enough for me to feel confident enough to attack, and I was maybe strong in the wrong places,” responded Turkington. “I was wary that it was race one of three on the day and reflecting on Oulton, I gave myself a tough day after not finishing race one. I was trying to force a mistake out of Sutton but overall I have to be happy with the result.

“We didn’t get the car in the sweet spot in the wet but we definitely have found it in the dry. I’m feeling confident for the rest of the day. It should get interesting – there’s not too much weight to add to my car and we’re in good shape.”

“It’s a great result,” said Jackson. “This is a podium for Luke Davenport. First and foremost, we need to get him back but for the team it’s great. We’ve put in a lot of hard work from Oulton to here and we’ve got a platform to build on. The rear-wheel drive cars looked to be in a class of their own from five laps on and to be in the mix with them, with them so suited to Croft is fantastic. We’ve found a lot in the car and hopefully we can keep it going.”

Despite Sutton’s victory it wasn’t a complete success for Adrian Flux Subaru Racing, as incidents arguably prevented all four of its cars from taking top six positions. Jason Plato slid wide at Sunny on the opening lap, although he later recovered to claim tenth, whilst contact between Josh Price and James Cole ended one of their best ever performances in the BTCC.

Other contenders lost out early on, most notably Halfords Yuasa Racing’s Matt Neal as his Civic Type R suffered rear-left damage following contact with Price’s Subaru. Reigning champion Gordon Shedden provided some joy for the Honda marque as he claimed fifth with maximum-ballast, although he was pipped at the post by the rampant BMW of Rob Collard.

The third BMW of Andrew Jordan claimed a relatively lonely sixth place, whilst Josh Cook starred on his MG return with seventh.

The two Toms, Ingram and Chilton, were locked in battle for much of the 15-laps with the former getting his championship challenge back on-track with eighth.

There was further late drama for the final place in the top ten as Plato nudged his Levorg down the inside of Ollie Jackson’s AmD Audi at the final hairpin. The BTCC legend got a great run and pipped the S3 Saloon across the line, although Jackson still impressed with a number of his own eye-catching moves earlier in the race.