Ingram fired-up for fightback after further misfortune at Croft 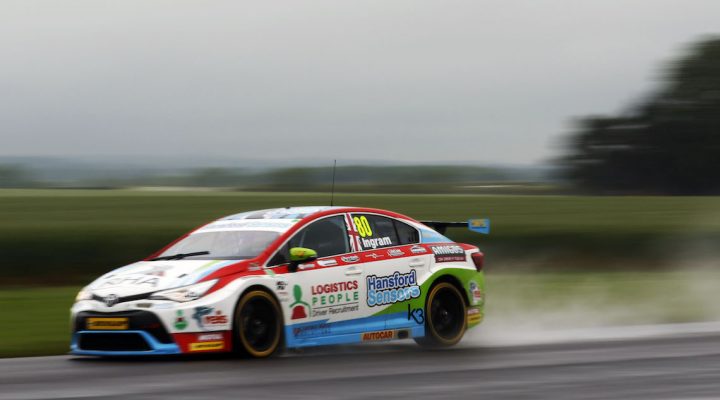 Tom Ingram saw his title aspirations take a knock at Croft, but the Speedworks Motorsport star has promised to come back all guns blazing when the 2017 Dunlop MSA British Touring Car Championship returns from its summer break.

Following a torrid time of things at Oulton Park, early-season championship leader Ingram headed further north to Croft intent on clawing back ground in the chase for the most coveted crown in British motorsport. Unfortunately, a minor error in treacherous conditions towards the end of the first free practice session resulted in significant front end damage to the #80 Toyota Avensis, ruling the 23-year-old out of FP2 as the Speedworks mechanics effected repairs.

That left Ingram short on track time going into qualifying, but he was nonetheless on a lap that looked good enough to put him on the front row of the starting grid when the red flags flew less than ten minutes in for a serious accident involving no fewer than 12 cars, which he carefully managed to avoid.

With no break in the weather and the need to carry out extensive barrier work, the running did not resume, meaning Ingram would line up an unrepresentative 13th amongst the 29 high-calibre contenders for the first race the following day.

In race one, Ingram immediately set about moving forward, gaining two spots on the opening tour and cracking the top ten next time around. Settling into a multi-car scrap over fifth, a mature drive saw him take the chequered flag eighth – and second-highest Independent entry – to secure a solid clutch of points towards his title bid.

With less success ballast on-board for race two, Ingram made a bright start to advance to seventh, only to then find himself in contact with Josh Cook later around the first lap, breaking the Toyota’s suspension and consigning him to the rear of the grid for the day’s finale. From there, Ingram gritted his teeth and lapped amongst the quickest drivers on the track en route to a 16th-place finish – just one spot shy of the points.

His misfortune means he enters the mid-season hiatus having slipped to fifth in the overall standings – 48 points shy of the top of the table – albeit still leading the way in the Independents’ Trophy. Speedworks sits second in the Independent Teams’ classification and fourth in the outright Teams’ rankings – with all eyes firmly fixed on an immediate fightback at Snetterton at the end of next month.

“Another tough weekend, but we’re far from beaten,” said Team Principal Christian Dick. “We could – and should – have come away from Croft with a good, strong points tally around a circuit that traditionally favours rear wheel-drive machinery, so to have had that ruined by another driver’s impetuosity was very hard to accept but we will go away, take a deep breath and come back even stronger.

“Going back to the start of the weekend, I don’t think the ‘off’ in FP1 affected us too much to be honest, because nobody really found any significant time in FP2 – it was more the fact that qualifying turned out to be such a lottery with the accidents and session stoppage. In that situation, you’re always going to get winners and losers and whilst it clearly didn’t work out in our favour, we were confident we could battle our way up the order and that’s exactly what we did in race one.

“Tom drove well and was very happy with the Avensis, and things were looking even better in race two with a lighter car until Cook drove into the side of him. That was frustrating in itself, but it was made infuriating by the fact that Josh had a drive-through penalty coming his way so he wasn’t even in contention.

“That was obviously a double blow because it meant we had to start race three from right at the back, and Tom did well to work his way through to 16th, pulling off a lot of clean, measured overtaking manoeuvres and bringing the car home with absolutely no damage – which was more than could be said for a lot of drivers out there.

“Focussing on the positives, Tom’s still leading the Independents’ table – albeit by a reduced margin – and he’s still very much in touch in the main championship too. Yes, our current position makes the task a bit more difficult than it looked a few weeks ago, but we’ve got two of the major rear wheel-drive circuits out of the way now and we’re carrying a bit less ballast, which will definitely help.

“We’ve had a rough ride recently, but that only gives us extra motivation to dig even deeper and extract more performance out of the Avensis, and I can assure you that we will come back fighting at Snetterton. I’m really excited about the second half of the season – this isn’t over yet by a long shot.”

“We began the weekend on the back foot after FP1, with a small mistake on my part that incurred a fair degree of damage,” added Ingram. “The Speedworks boys did a tremendous job to repair the Avensis in time for qualifying, for which I owe them a massive ‘thank you’.

“Despite missing FP2, we knew we were there-or-thereabouts going into qualifying but the session was obviously cut short by the kind of accident that nobody ever wants to see, and my thoughts are with all the drivers involved for a speedy recovery.

“The stoppage meant we didn’t get chance to put down a representative lap time – only a banker to make sure everything felt right before the big push. I was already a second up and on course for a front row start on my next lap when I came around the corner and saw cars all over the place and the red flags flying. Ultimately, it was just one of those things and it paled into insignificance in light of the fact that three drivers were injured.

“From 13th on the grid, race one went perfectly to plan, with good pace and a good haul of points and that left us in very strong shape for the remainder of the day. With a few set-up tweaks and far less weight on-board in race two, we were ready to go on the attack. I got a great start to move up to seventh and we were well in the mix.

“The contact cost us a lot of points from both that race and the next, because when you start at the back in a championship as competitive as the BTCC is at the moment, there’s only so much you can do. Our target was to break into the top 15 in race three – and we very nearly succeeded.

“We’ll take some time out now to regroup, which will be good for all the boys in the team because they have genuinely worked their socks off over the last few months. We’ll come back refreshed at Snetterton and ready to go again.

“Admittedly, we’re not in as good a position as we were after Thruxton, but we’re by no means in a bad position either. Gordon Shedden was 52 points off the championship lead at this stage last year and he went on to win the title – so there’s no reason at all why we can’t do the same.”