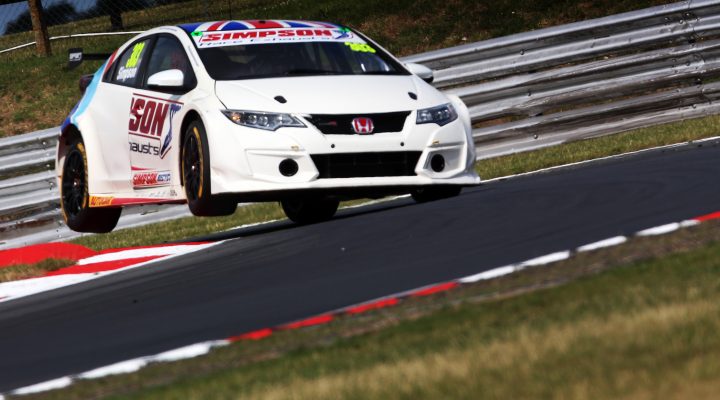 The Berkshire driver is well into his second season in the Dunlop MSA British Touring Car Championship, and he’s enjoyed a stronger follow-up campaign to his debut year in 2016 as a regular entrant into the points-paying positions.

“It’s been a much better experience this year and I know now what the championship is all about,” said Simpson. “Having Team Dynamics behind me has been a big help.

“The last few meetings it’s starting to click and every track I’ve been to this year, I’ve been quite a bit quicker than I was last year – we’re moving in the right direction. Extracting the last few tenths is always the difficult bit, to put us in and around the top boys that have been doing it for 20-25 years, like Matt (Neal) at Dynamics has. We’re getting there and it’s about not trying to run before you can walk.

“I’ve never driven in anything so competitive in my life. Everything I’ve raced in previously had sort of half a dozen cars that could realistically win a race and you always had a big step to the next group in line. To have a second between the top 25 cars, people just don’t realise how tight it is. When you’re looking for those tenths on a two-mile track, it’s crazy.”

The annual test allows drivers and teams to get a unique early look into what is required in terms of setup to be fast around Norfolk’s Snetterton circuit, with the BTCC set to reconvene after the summer break there for Rounds 16, 17 and 18 on 29-30 July. Simpson used the time to its fullest, and is hoping to have a head start when the competitive on-track action gets back underway in just under three weeks’ time.

“We just tried a lot of things in testing, with the dampers and spring rates on the front and the rear for example, then went out on four or five lap runs to see how the adjustments affected the car.
Within two or three laps you’ve got a feeling for how the car has reacted. We’re not using new rubber so we have to weigh up those changes to take that into account.

“Because of my relative lack of experience in the championship, qualifying every round usually sees me go faster on the second run.

“It’s a lack of miles that costs me and it makes me wish I could start all over again, so this test will put us in good stead for the next round here at the end of the month with some laps now.

“I have a good set up in the car and hopefully that’ll mean we can hit the ground running in FP1 and break into that top ten – that’s the aim. There’s a good chunk of drivers who’ve been racing in the BTCC for many a year so it’d be fantastic to be in amongst them.”