Austin in the mix 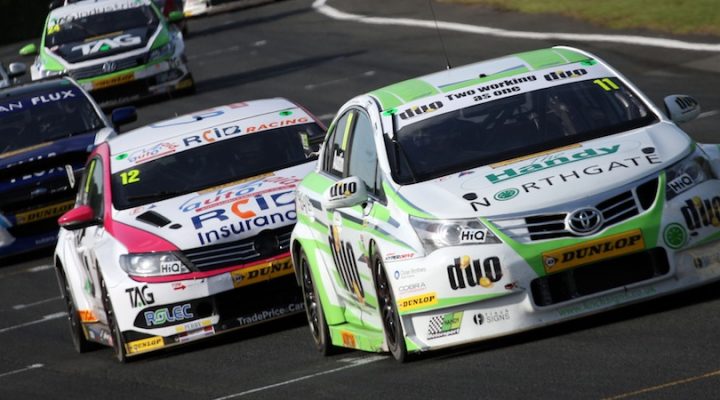 Handy Motorsport’s Rob Austin entered the summer break in with more than just a shout of challenging for the Independent Drivers’ title, sitting just three points beneath early overall standings leader, Speedworks’ Tom Ingram. Austin’s also well placed in eighth in the overall Drivers’ Championship, with everything marrying up to what he described as his ‘first real crack’ in the Dunlop MSA British Touring Car Championship.

The Snetterton test was a positive for the team, despite bad weather bringing its running to an early conclusion, and Austin is looking to build on an impressive opening half to the campaign at Snetterton – a circuit that should in his opinion favour the Toyota Avensis more than Oulton Park and Croft Circuit given their theoretical rear-wheel drive bias.

“We had a fairly intensive programme of things we wanted to try,” said Austin. “We worked our way through them early on and despite the rain, which scuppered some of our plans, we’re really happy with what we managed to learn.

“The car’s been really strong through the first part of the year. At Oulton Park and Croft, the fact they favour the rear-wheel drive cars put us on the back foot a little bit and perhaps we need to find some more at those types of circuits. We’re coming back to places that should be better for us, like Snetterton, so I’m looking forward to being somewhere that should suit our car and front-wheel drive.”

CAR CONTROL: Austin enjoyed a good test at Snetterton last week and he also produced this incredible save!

https://www.instagram.com/p/BWaXWigHxi4/?taken-by=officialbtcc
The first five weekends of 2017 have left the Evesham racer in the best position in the championship at this stage of any season in the BTCC thus far. He’s surpassed his points tally for any other season at the half-way stage too, and now he is looking to add a win or two.

“I want to win a race or two this year,” Austin continued. “I really feel like I missed one opportunity already so if another one comes along we’re going to have to grab it with both hands.

“We’re happy with the way this year’s gone. I’m on the most points and it’s the best position I’ve ever been in at this point in the championship. That tallies with what I feel is my first real crack at it.

“The Audi was always compromised. In my opinion it was too heavy and too long. Last year was a big learning year so, I always felt that this was my first proper crack. Eighth in the championship and three points off leading the Independents’ is really good for us.

“If I hadn’t messed up at Brands Hatch at the start of the year, I think we’d be right in the mix in the main championship and leading the Indies. I haven’t forgiven myself for it!

His points total has taken a restrained approach to amass. The racer’s instinct is to find a gap and go for it but, in a championship as closely fought as the BTCC, this may not always be the best course of action. Instead, Austin has taken to measuring his opportunities and weighing each up on merit given all potential outcomes.

“I’m thinking about overall points really, not a specific target. Certainly, there have been opportunities this year where I’ve said ‘I’m going to pass this one up, it’s much safer to stick here’ in terms of points scores – to try and get points on the board.

“The first corner at Croft, if you’re brave you can go around the outside there and everybody queues up around the inside. In one of the races, there was a really big gap which was very tempting to go for.

“The racer in me wanted to go for it but it was also a very big risk as you can very easily just get turfed out and into the gravel.”