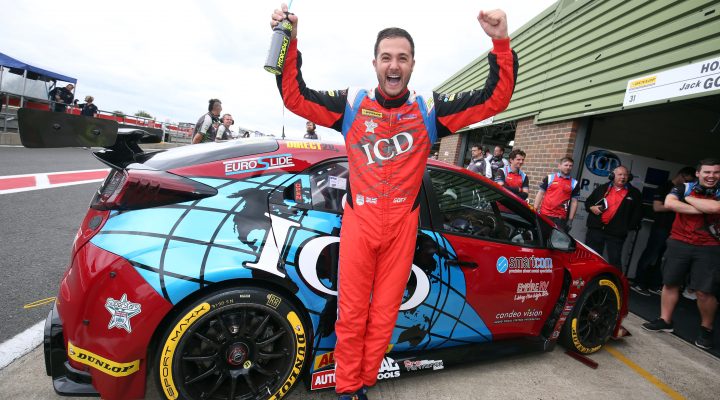 Eurotech Racing’s Jack Goff claimed his first ever Dunlop MSA British Touring Car Championship pole position as he produced a lap of a lifetime during qualifying at Snetterton.

The Honda Civic Type R driver led the way for the majority of the 30-minute session, but it was his final run where the young talent unlocked his true potential. Goff rounded the 2.99-mile Norfolk circuit in a hugely impressive time of 1:55.786s, which would ultimately leave him nearly half a second quicker than his nearest challenger.

“It’s always a bit worrying when you get out of the car before the session ends!” said Goff. “It’s my first pole and it’s all down to these Eurotech guys. They’ve put the work in and the Honda Civic Type R was just fantastic out there. The car didn’t feel a thing like it did this morning. We knew we had some sort of problem in the car holding us back and we found the issue, which helped us. I think there was even a 1m55.5s in there somewhere, I could have gone even faster on that lap.

“It’s looking good, but we’ve got two rear-wheel drive cars directly behind and alongside us, so we’ll have to see what we can do at the start tomorrow. We’ve worked hard through the summer break and during the mid-season test and we’ve found a lot of things that were really good for the car and some ideas we had to chuck in the bin. We’ve been finding little bits and those bits add up. We’ve had a few bad rounds – Oulton and obviously Croft – with just a point from the last two weekends, so to come back here with a bang is perfect.”

The chasing pack was eventually headed by Team BMW’s Colin Turkington, who also showed his credentials in the final moments by pipping Ashley Sutton to the final place on the front row of the grid.

“There was a threat of rain coming late on in the session, so I was eager to get out there and bank a lap,” confirmed Turkington.

“It was a surprise to me this morning to be where we were, as the BMW always goes well around here. We hadn’t looked fast in practice, so it’s nice to flip it around in qualifying with the improvements we made from free practice. The guys gave me a great car when it mattered and I’ll take second place all day with the third heaviest car out there (in terms of success ballast).”

Sutton’s effort shouldn’t be underestimated, however, as the Adrian Flux Subaru Racing star bounced back from a track limits discrepancy to fire himself up the order in the closing seconds.

“We did a quick time but that was taken from under us, and we knew why (track-limits infringements),” explained Sutton. “I knew we had one last shot and we managed to do it at the last and go quicker than we had before. We’re still working on setup but it’s the closest we’ve come to finding the sweet spot. To be honest, the Hondas’ performance here last year showed how strong front-wheel drive is around here. We know how tough Snetterton is on rear-wheel drive cars, in terms of tyre management, so we’ll just have to see how we go.”

Fourth placed Matt Neal originally had his quickest lap time removed when his car was adjudged to have failed a ride height test during the session. Following a post-qualifying appeal to the Stewards by Halfords Yuasa Racing, the original decision was in fact overturned and triple champion Neal will indeed line-up on the second row.

Tom Ingram, Adam Morgan and Rob Austin had shown consistent pace throughout the day and the trio consolidated their form by taking fifth, sixth and seventh respectively. Speedworks Motorsport’s Ingram had set the fastest time of the day prior to qualifying and was ‘slightly frustrated’ not to have challenged for pole position, whilst Morgan’s Mercedes and Austin’s Toyota showed similar speed to the earlier indications during practice.

Andrew Jordan and Rob Collard made it three BMWs in the top ten in eighth and tenth respectively, whilst Jason Plato wedged his Subaru Levorg between them in ninth. The most notable absentee from the front-running order was reigning champion and standings leader Gordon Shedden – the Scotsman will start tomorrow’s opening encounter from 21st on the grid.

Snetterton is set to host three thrilling BTCC races on Sunday with thousands of fans expected to attend the Norfolk venue, whilst many more will catch the action live on ITV4 with the coverage commencing at 1045.