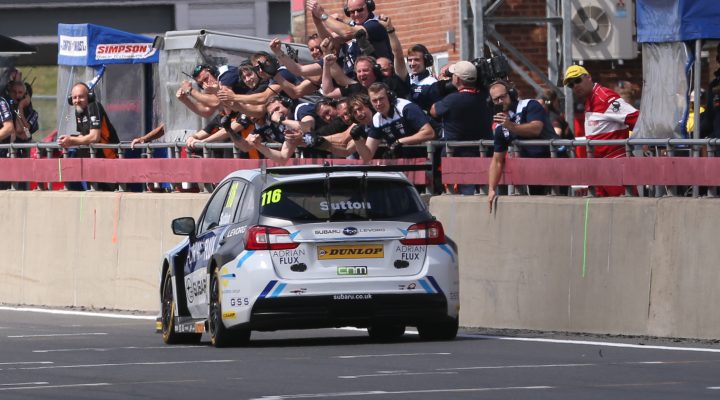 Ashley Sutton took advantage of his rivals’ woes to win Round 16 of the Dunlop MSA British Touring Car Championship at Snetterton.

Colin Turkington’s front-row starting BMW 125i M Sport made its normal fantastic getaway off the line and was by pole-sitter Jack Goff on the run down to Riches. An uncharacteristic mistake from the Northern Irishman, however, saw him spinning out of race-winning contention later in the race, which had seemingly handed Goff his chance to claim victory.

The Eurotech Racing driver produced a stellar performance, but after choosing to run the Dunlop SportMaxx option tyre – the softer compound of the two on offer – the pace of the Honda Civic began to fade late in proceedings.

Sutton eyed his opportunity as he reeled in the 1.2 second gap ahead of him and when Goff’s Honda wiggled slightly on the exit of Hamilton’s the pair were side-by-side on the drive down to Oggies corner. Sutton’s Subaru Levorg completed the move and he went on to take his third win of the season – further building his championship challenging momentum.

“I didn’t want the summer break at all,” said Sutton, having also won races at both Oulton Park and Croft. “We came here and showed good performance. We didn’t put it on the front row in qualifying but it’s only a part of the puzzle. I wouldn’t have expected a mistake like that from Colin (Turkington) when he was out front and from then I knew my time with Jack (Goff) would be a waiting game.

“He made one slight error and I made the most of my opportunity – I just managed to nip under him. If there’s a win on the cards, you know I’m going to do my best to get it. I can’t thank Adrian Flux Subaru Racing enough as they’ve been fantastic from the off, right on it. We found a lot of issues with the car in the test with both mine and Jason Plato’s car and we’ve sorted a lot of them. The championship is in the back of my mind but race wins are key at the moment, so it’s about calculating risks.”

Goff, on the other hand, declared he had mixed feeling about the result, “I was saying before the race that I wouldn’t be happy unless I converted pole into a win,” he said. “But with front-wheel drive and soft tyres around here, it was always going to be tough to outdo a rear-wheel drive car on medium rubber. Second is better than a DNF and we’re pleased really.

“I had a call over the radio to say I’d lost two-tenths to Ash (Sutton) but then pulled it back and we were managing the gap. Maybe putting the hammer down took some life out of the tyres, meaning he could eventually catch. I think previously we expected the soft to be the better tyre choice here but it went off a bit out there towards the end. It’s out of the way now so let’s see what we can do with the mediums.”

Halfords Yuasa Racing’s Matt Neal took an extremely hard-earned podium position, as he had Andrew Jordan’s BMW and Jason Plato’s Subaru breathing down his neck at the finish. The latter two had been inseparable throughout the 12 lap contest but Pirtek BMW’s Jordan produced his own defensive masterclass to grab fourth.

“I’m over the moon with third, it’s like a win for us,” confirmed Neal. “I can’t say I was upset to see Tom (Ingram) disappear from my mirrors – I don’t know what happened to him. It was then a case of hanging on really – making no mistakes and looking after the tyres to bring it home. With five laps to go, I thought ‘I’m not going to have enough left here’ to hold off Andy (Jordan) but I think the Subaru (Plato) kept him busy luckily enough, and I managed to keep it clean and hold on.”

As noted, Neal’s initial challenge came from the Toyota pair of Tom Ingram and Rob Austin, but contact between the two Avensis’ scuppered their hopes. Austin retired with suspension damage, whilst Ingram recovered to finish eighth, one place behind the similarly recovering Turkington.

This meant it was a hugely popular top six finish for TAG Racing’s Jake Hill. The Kent driver’s pace has not always been converted into the results he has arguably deserved, but that wasn’t the case in this encounter as the Team HARD-run VW stayed out of trouble and produced the goods.

Rob Collard’s BMW and Tom Chilton’s Vauxhall completed the top ten position, with the former seemingly struggling for pace in his ballast laden 125i M Sport.

Gordon Shedden had to cope with maximum ballast and a lowly grid position, but the Scotsman carved his way brilliantly through the order. The Honda man looked on for an encouraging 11th place finish but he lost two places on the final lap following contact with his fellow countryman Aiden Moffat.