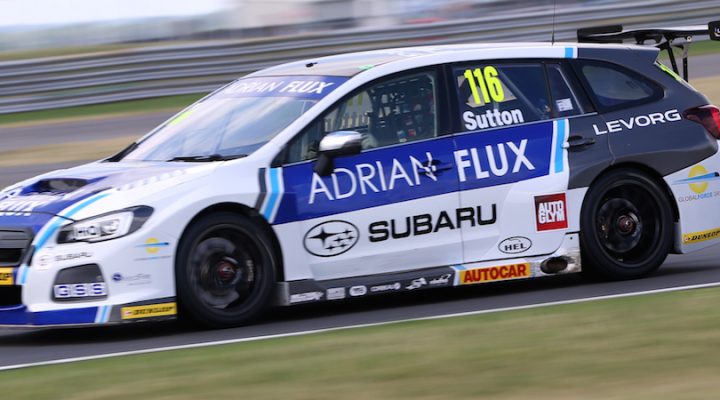 The race one winner made a good getaway in the second bout and was able to fend off Jack Goff’s Honda and the fast starting BMW of Andrew Jordan into Riches. From there, Sutton gradually pulled away from the chasing back squabbling behind and he was more than six seconds clear in the latter stages. The Subaru Levorg cruised through the final laps as Sutton took the chequered flag and with it, the championship lead.

“We’re in some real rhythm at the minute and I’m really enjoying it,” enthused Sutton. “The car’s phenomenal. We made some changes between races and if anything, it was better than it was in race one. It always helps when there’s a lot of squabbling going on behind but I’m so focused on what’s going on ahead – forget the mirrors and crack on!

“It’d be a push to do it again in race three. The soft tyre isn’t as strong as everyone was expecting it to be here, and with full ballast it’ll be a real challenge but I’m up for it. Considering where we were at the end of Brands (and the opening three rounds) I’ll take where we are now! It’s just about being consistent now and it’ll only get harder from here on in.”

Goff and Jordan couldn’t hang on in their pursuit for podium positions, as they were eventually muscled down the order. Contact between Jordan and Jason Plato on the opening lap sent the Subaru man tumbling out of contention, but there was worse to follow for Josh Cook and Stewart Lines towards the back of the field as both cars were fired off into the barrier. Cook’s MG continued but the safety car was called in order to retrieve Lines’ stricken Ford.

Team BMW duo of Rob Collard and Colin Turkington made their way past Jordan and Goff after the restart as they began their own intra-team battle for second. Jordan and Goff were further demoted when Team Shredded Wheat Racing with Duo’s Mat Jackson also got by.

Turkington got the run on team-mate Collard along the Bentley Straight on lap 12, before the double champion completed the move around the outside at Brundle’s. Collard had to be alert to tuck back in and defend from Jackson and that’s how the top four positions would remain until the finish, whilst Goff and Jordan came home behind the lead quartet.

“It’s always a lot more difficult trying to pass your team-mate!” said Turkington. “Both Andy (Jordan) and Rob (Collard) were quick at the start but I got the sense later on that they were starting to struggle – I was getting it turned in a little better. Side-by-side through the Esses is probably not advised but as a driver you’re just hungry to get as high up as you can.”

Reigning champion Gordon Shedden enjoyed another thrilling race as he came from 13th on the grid to finish seventh – and with it a front row start for race three.

Arguably the performance of the race, however, went to Subaru’s James Cole, who has been showing solid progress in recent rounds. The Liverpool man eventually finished eighth after a last gasp pass on Honda’s Matt Neal, and he would be further rewarded with pole position for today’s final showdown. Neal took ninth ahead of Speedworks Motorsport’s Tom Ingram.