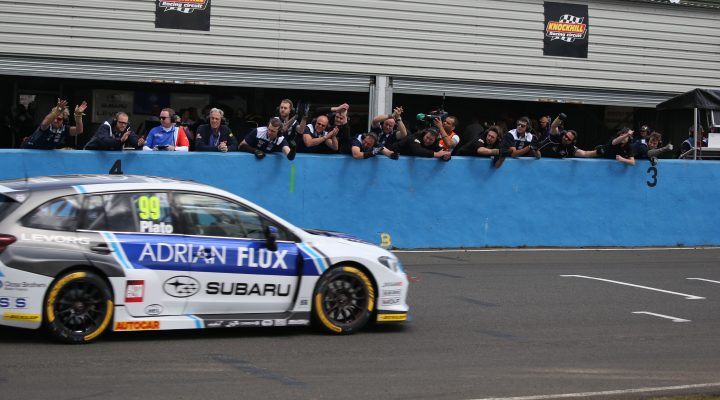 The front four – all rear-wheel drive machines – made an even getaway off the line, meaning Plato led from team-mate Ash Sutton, and the two Team BMWs of Colin Turkington and Rob Collard.

The battle remained tense throughout the 24-lap race with the quartet barely separated by more than a second. The Subaru duo of Plato and Sutton even made a failed attempt to switch positions, in order to provide the latter with a potentially vital championship point for leading a lap, but when the chequered flag eventually fell it was the elder statesman taking a hugely deserved win.

James Cole made it three Levorgs in the top five as he got the better of an eye catching battle with the Speedworks Motorsport Toyota of Tom Ingram. The pair ran side-by-side across the line on lap nine, but Cole would have to wait until three tours later before completing the pass.

Triple champion Matt Neal was next up in the order as he made steady progress through the field. His final pass was by Dave Newsham’s BTC Norlin Chevrolet, after both had seen off Shedden’s ballast-laden Honda Civic Type R.

The race was a high class contest throughout with only one minor incident blotting the copywork. Contact between Rob Austin and Brett Smith, following an off-track excursion from Rory Butcher’s Ford, created a minor melee but all were able to recover and finish the encounter.

Jason Plato said: “We found something in qualifying yesterday which we thought about after scratching our heads and it looked like we had a bit of a differential issue. We had a complete change of that unit last night and the car’s a different machine now. We think we’ve found the gremlin. I should have the advantage in the second race as the soft tyre is better in a few key areas. It’s just a shame we couldn’t get that point for switching spots for Ash (Sutton), we tried!”

Ash Sutton said: “Jason (Plato) wanted the win and thoroughly deserved it but I needed the extra point – we swapped and it was a great little bit of teamwork, it was just a pity it didn’t quite work out. He’s had his difficulties with his car this year and my side of the garage has been fine, but it’s nice to come and get a one-two and to lock out the front row in qualifying too – great for Adrian Flux Subaru Racing, phenomenal really. The soft tyre was an advantage but the weight with the ballast does even it out a bit. It’ll be a level playing field again in race two when Jason has the softs and the added weight.”

Colin Turkington said: “I was a bit quicker at the beginning of the race – the BMW switched on really fast. I got the fastest lap and there was a phase where I started to catch Ash (Sutton) but in the mid part of the race I was dropping a couple of tenths, even driving to the limit of my 1 Series. It was always the aim to come here and score points, and with the ballast coming out you’ve got to think we’ll have a good chance in race two. The two guys ahead will race, which is a good thing. Jason’s on the softs so he may tear into the distance but we’ll focus on ourselves. If we can hunt in packs (the Team BMWs), we should be looking good.”