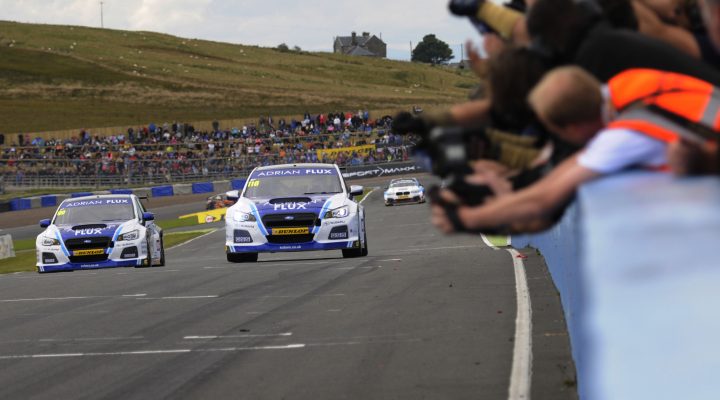 The race originally commenced in frenetic fashion as a multi-car accident saw no fewer than five cars fired out of the contest. With cars littered in the gravel and across the track the race was inevitably red flagged and a lengthy stoppage followed.

Plato eventually led away from the restarted race and the Subaru duo remained inseparable throughout. The slightly lighter machine of Sutton had the edge, however, and he would finally make a move stick on lap 11. Plato kept his young prodigy honest for the remainder of the duel, but Sutton held on to fire himself within two points of the championship summit.

Colin Turkington maintained his position at the top of the standings as he claimed his second podium of the day for Team BMW. Rob Collard finished fourth in the sister Bavarian machine, as he kept up his own championship challenge.

James Cole scored another high five finish, as he had done in the final contest at Snetterton last month and again in the earlier opener at Knockhill. Former UK Formula Ford champion Cole has been showing a real upturn in form in recent weeks, and the results are finally matching that promise.

Halfords Yuasa Racing’s Gordon Shedden took a lonely sixth place as most of the action kicked off behind the Scotsman.

Young rookie Josh Price came home seventh after he had gone toe-to-toe with triple champion Matt Neal for a number of laps. The pair made unfortunate contact, however, which saw Neal’s Honda spinning off into the gravel while Price continued unopposed. Post race, however Price’s seventh spot was lost after his exclusion for failing to slow/overtaking under flag signals.

The final three drivers in the top ten were blanketed by little more than half a second as BTC Norlin’s Dave Newsham edged out Tom Ingram’s Toyota and Rory Butcher’s Ford. There was further post-race joy for debutant Butcher when he was picked at random to start today’s final race from pole position.

Jason Plato said: “I just got into a little zone in the middle of the race, landing off the kerb at the chicane I was getting some drift wide every lap and I couldn’t work it out. Then all of a sudden, it disappeared and then Ash (Sutton) started to get those issues. I know a bit of fluid went down so maybe it was that. It was a great result for the team. I’m just so happy to be competitive again. I’m pretty awful to be around when things aren’t going well – this is my life. It’s everything about my life and when there’s stuff you just can’t get a handle on, it’s frustrating. We’ve found the problem now and that was for all you people who said I was too old…”

Colin Turkington said: “It’s more good points. Any time you get a podium in a BTCC race, it’s a good result. It’s a little bit disappointing to trail these guys home again but we got everything we could out of the BMW there. If the two ahead weren’t in the race, I’d be telling my engineers it’s the best car I’ve ever driven – but obviously we’ve got more to find. I can only understand what’s going on with my car. We improved the chassis but we seemed to drop back from the leaders. It was still a really strong race for Team BMW.”