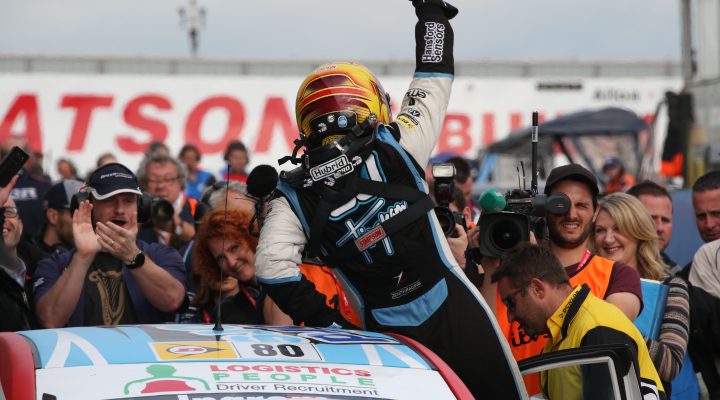 Whorton-Eales and debutant Butcher held an unlikely front row start for the final race and both defended valiantly on the opening lap, before pole-sitter Whorton-Eales made contact with a barrier and dropped out of contention on lap two.

There was a family feud for third place as reigning champion Gordon Shedden passed brother-in-law Butcher, whilst Ingram inherited the lead. The Toyota man never looked back as he took his third win of the 2017 campaign to reignite his championship challenge – it was also the first win at Knockhill for the Japanese marque since Julian Bailey’s success in 1993.

Butcher’s Team Shredded Wheat Racing with Duo Focus would also be shuffled down the order, as the battle for the lower top ten placings intensified.

Tom Ingram said: “It’s been a long time coming hasn’t it. I had a funny feeling after about five laps, saying to the team ‘when do you think the safety car will be then?’. It never goes that easily does it? Amazingly though, it went perfectly and I got the jump at the restarts. Ant (Whorton-Eales) made a mistake at the chicane which allowed me to get through. My word, the Speedworks guys have given me a great car this weekend. What’s really been annoying is that our struggles haven’t been our fault. If it were mistakes on my part or from the team, then it’d be okay but when it’s not it gets very frustrating. We’ve got a great team and a great car underneath us. I heard people saying it was a fluke at the start of the year and this shows it wasn’t.”

Gordon Shedden said: “I could see the BMWs coming! The safety car definitely helped – it saved my bacon. The car was good but it was just lacking a bit. Tom (Ingram) had mega pace and drove really well so I’ll take second place. Rory (Butcher) was driving well and it’s that first touring car meeting and just realising what goes on in the first few laps. He did well and he was fast, he’ll come out stronger in the next one.”

Colin Turkington said: “If I could keep finishing third between now and the end of the season I’d be in pretty good shape but Knockhill has been great. It’s always a circuit I enjoy coming to. I wouldn’t have expected that. It shows you don’t always have to win the races to score the most points. I go home tonight satisfied but also quite aware of the hard work that lies ahead. There’s nobody slow out there, everybody’s fast and those reverse grid races are incredibly tough. I picked my way through and just survived at the end.”