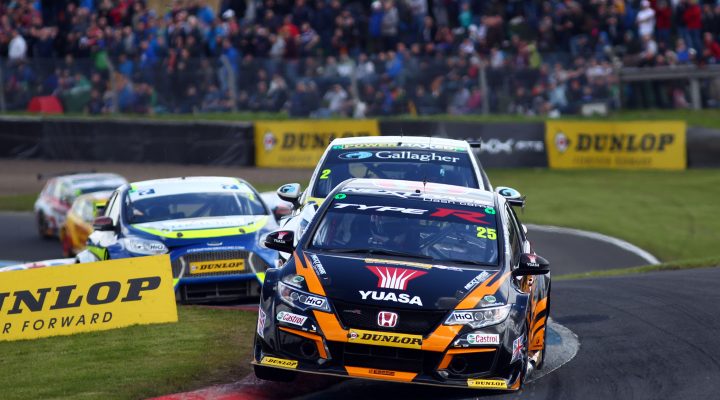 The triple champion made use of the option tyre in race one to overcome a disappointing qualifying session – his progress on Saturday tempered by some unfortunate timing, whereby he missed a dash at the last to set a time on SportMaxx slicks as the track dried.

After carving his way through the pack from 21st to ninth in the opener, race two brought about an early retirement with contact forcing him out of contention, meaning he once again had to charge through the order. In the finale, Neal scythed from 22nd to eighth – bringing his overall weekend tally to 26 points, topping the #ForeverForward charts.

It was a similar fightback that saw Team Shredded Wheat Racing with Duo man Mat Jackson second in the tally. He suffered technical issues before race one had begun but gained 15 places from the very back in the second bout.

Motorbase stablemates Rory Butcher, on debut, and Martin Depper joined Jackson in a domination of #ForeverForward in that same race – each gaining 16 spots. Jackson made up nine positions in race three to bring his total to 24.

Fans voted unanimously in favour of Dave Newsham’s pass on reigning champion Gordon Shedden on lap two of race two, with 48% voting for the BTC Norlin Racing driver. The second favourite pass was Subaru racer James Cole’s move on Tom Ingram’s Toyota on lap 12 in race one that earned 36% of the @DunlopLive fans’ votes.

Matt Neal remains top of the overall standings. With 101 points, he’s the first driver to break triple figures this year. Martin Depper moves up to second overall, courtesy of his 90 positions gained across the opening seven rounds. Completing the top three, Ollie Jackson has also consistently managed to place himself near the top of the standings, putting him well in contention for overall honours come the Brands Hatch finale.